OpenSea - decentralized marketplace for all sorts of digital items

OpenSea co-founder Devin Finzer shared his thoughts on what it takes to build a decentralized market place, and intersection of gaming and DeFi.

My name’s Devin Finzer. Before OpenSea, I worked at Pinterest as a software engineer and started a company that was acquired by Credit Karma. My co-founder, Alex Atallah, worked at Palantir and sold his previous company to Beatport.

Alex and I founded OpenSea as an open, decentralized marketplace for all sorts of digital items—from game items to digital collectibles to digital art. We allow users to buy and sell any non-fungible asset on Ethereum that complies with open standards (ERC721 and ERC1155 for now). For game developers, we currently provide an open storefront creation process, where developers can immediately get a customizable marketplace for their items without having to worry about building any of the auctioning infrastructure themselves. 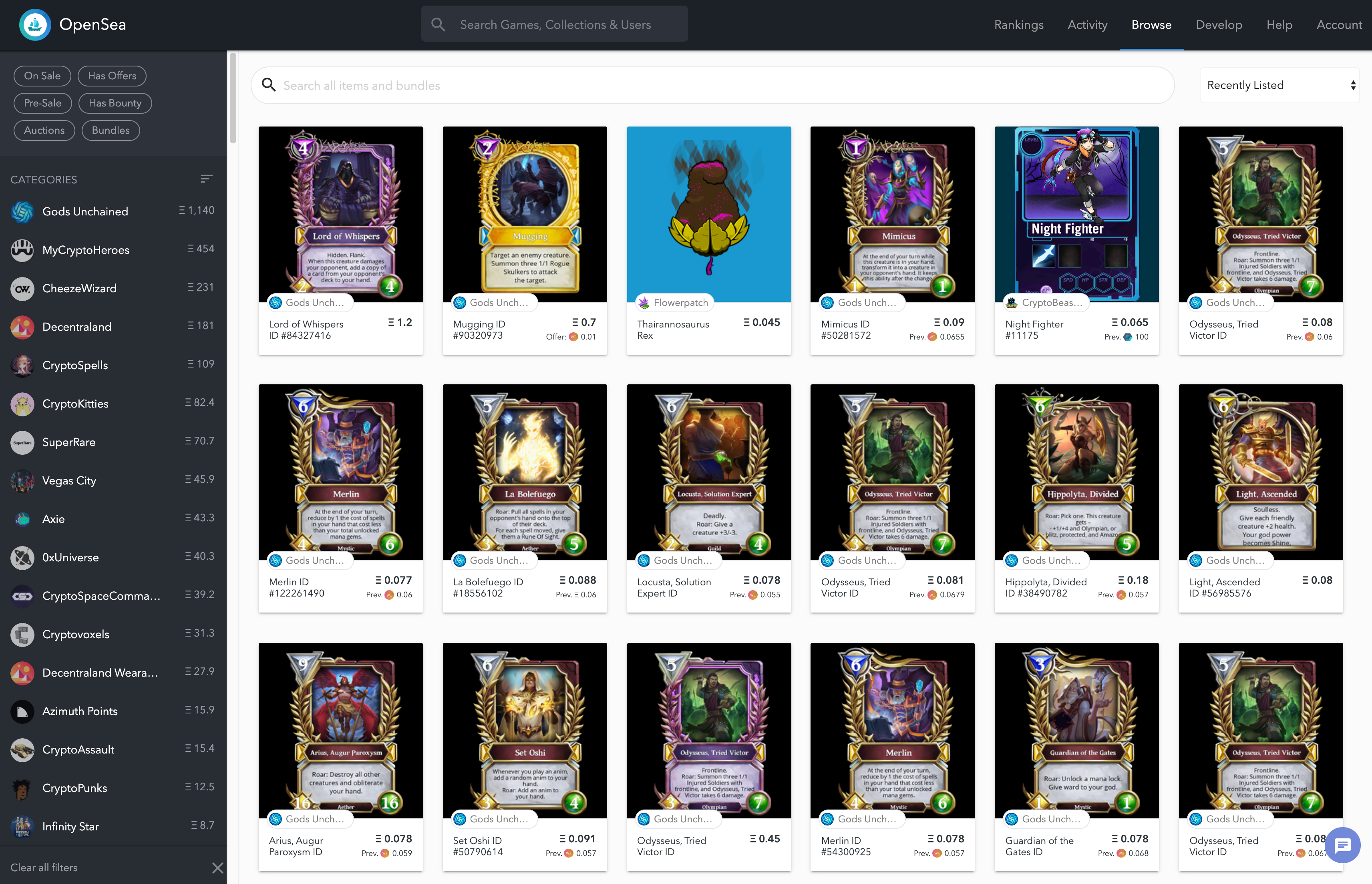 We validated the idea by joining the various communities for new ERC721 projects. Shortly after CryptoKitties, there emerged several experimental ERC721 projects, including CryptoCelebrities, Ether Tulips, and Mythereum. Excitingly, some of these projects did not have ways for users to trade the assets, so OpenSea started serving that purpose. We grew organically through cross-pollination between the various gaming communities, primarily on Discord.

What went into building the OpenSea?

We shipped the first version of OpenSea within a couple of months, in order to get a product out there in the wild and start testing with early adopters. Luckily, users in the blockchain space tended to be somewhat lenient – they understand that the technology is early and rough around the edges. We’ve since continued refining the product — working on the underlying smart contract layer (a project called Wyvern).

The cryptocurrency landscape has evolved significantly since the founding of OpenSea. In particular, over the last year, “layer two” scaling for Ethereum has gone from being a somewhat nebulous idea to a concrete set of approaches, with several projects having launched with live mainnets. Additionally, the landscape of layer one protocols has become increasingly diverse, with projects like Cosmos, Polkadot, and NEAR protocol all launching (or getting close to launching) mainnets. The rapid pace of innovation here is exciting for OpenSea, as more rich, varied applications can be built on more scalable blockchains. It’s also a challenge, as it requires us to abstract our user experience over a constantly-shifting underlying tech stack.

We currently take a small fee on successful transactions. This business model is really just a starting place for OpenSea and allows us to generate some revenue in the early ecosystem. We think there is an incredibly wide design space for business models in the decentralized application world, especially for a digital asset marketplace. As space matures, we plan to explore these.

The core focus of OpenSea is building the best marketplace for blockchain-based digital assets. Our north star metrics are volume (currently around $700,000 per month) and site usage (now about 1 million page views per month). The OpenSea roadmap includes core upgrades to the marketplace functionality (for example, allowing users to swap mixed bundles of digital assets), expanding the set of partners that leverage OpenSea as their primary marketplace, and exploring other chains beyond Ethereum. At a high level, we’re excited about forming the building blocks to make the non-fungible token native to the internet.

What excites me about DeFi and decentralized apps is that the design space is very wide, and we’re only at the very beginning of exploring it. At its core, blockchain is a coordination layer for applications to interact with each other in a trusted fashion. The first killer use cases for this coordination layer are financial primitives: exchange, lending, stable coins, etc.

Soon, however, I think we’ll see DeFi interact with the small but growing blockchain gaming ecosystem. Gaming often operates on the bleeding edge of new technologies. Many blockchain games blur the lines between games and real economies: one could imagine take a loan out using virtual Decentraland land as collateral or earning a living curating digital art for virtual museums.

I think we’ll see a new breed of entrepreneurs that leverage the DeFi ecosystem and build value in these new game economies. If you closely observe the blockchain gaming ecosystem today, you’ll find a vibrant primordial soup of ideas, and I think some of these will start to blossom over the next 5 - 10 years.

Talking with Andrey Belyakov about DeFi, derivatives market, and why interest rate swaps it is one of the most important instruments in the fixed income market

The Defiprime Post #53: Your Weekly DeFi News in Bite-Sized Fashion