We talked with Frax Finance founder Sam Kazemian about algorithmic stablecoins and how fractional-algorithmic mechanism is different.

I got into crypto way back in 2013 while in college at UCLA. It seems like an eternity now. I was interested in mining Bitcoin and the OG altcoins. From there, I founded Everipedia.org after graduating and raised $30m in funding from Galaxy Digital in 2018. Everipedia is doing great and building out a knowledge ecosystem including a prediction market (prediqt.com) and an exotic asset AMM called mindswap.finance. We are beginning the move to ETH L2 currently and should have Everipedia, PredIQt, and MindSwap all on Ethereum in the first half of 2021!

But what I’m personally working full time on now with a close group of friends has been my passion for a long time. I’ve been working on what would become Frax since early 2019. For years now I have been telling friends and colleagues that algorithmic stablecoins could become one of the biggest things in crypto and now everyone seems to believe it. Jason, Travis, and I have now set out full time to build this out and make it one of the biggest projects in DeFi. 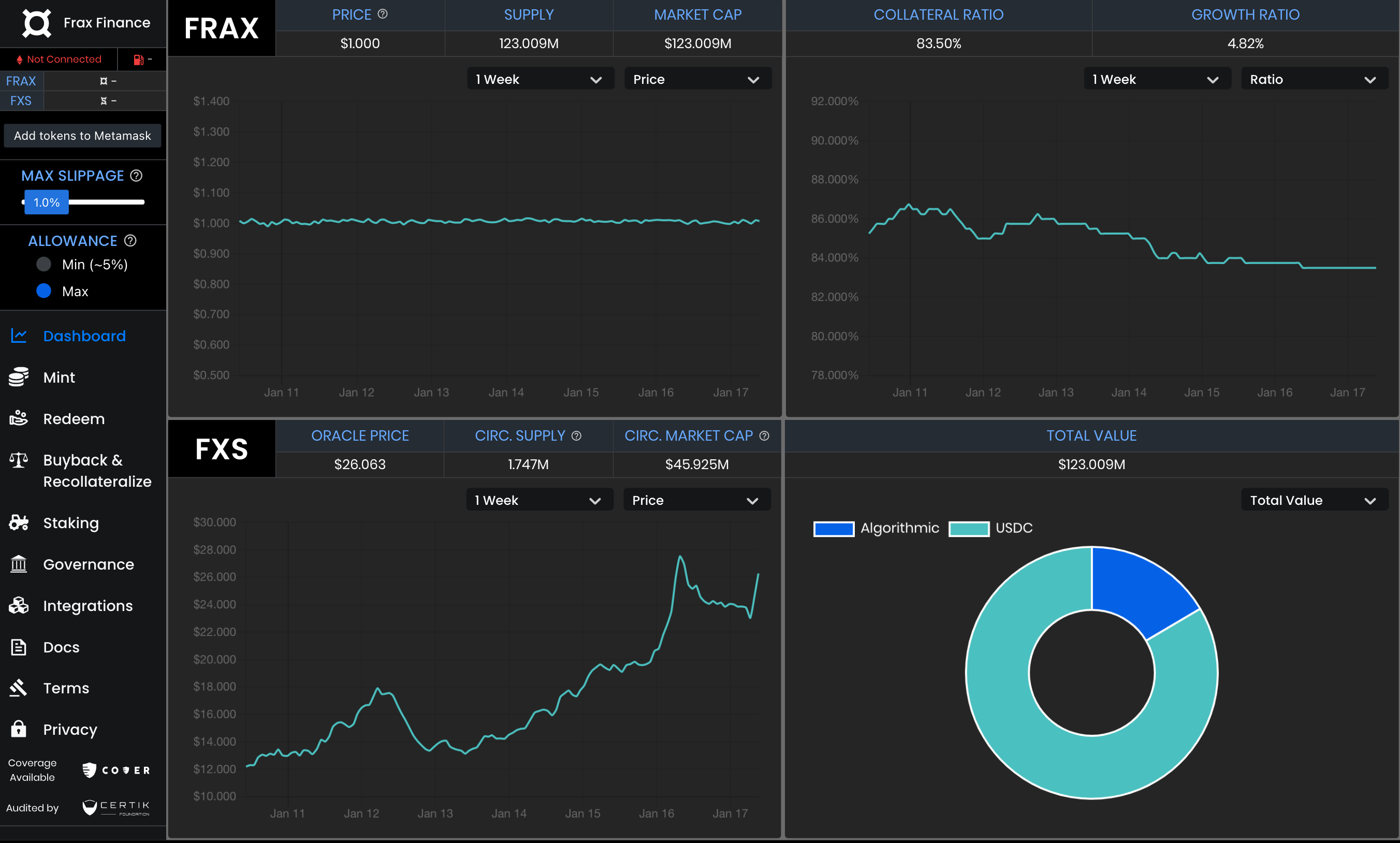 Frax is the first algorithmic stablecoin to coherently introduce the idea of fractional backing with a novel market-set mechanism to find the ideal collateral ratio. We actually came up with the idea after everyone heard that Tether was only partially backed by dollar reserves yet held the peg tightly anyway. This clearly demonstrated that Tether was so integrated in the crypto space that it had a monetary premium in and of itself. Tether was useful as money without needing to get 100% of its backing from collateral. Obviously, it was still disingenuous for them to not disclose their low reserves, but the entire situation got us thinking about how we could create an algorithmic stablecoin that could transparently, trustlessly, and elegantly measure its own monetary premium. That’s how we came up with Frax’s revolutionary fractional-algorithmic mechanism (and that’s where it gets its name).

I’ve always been interested in algorithmic stablecoins since 2018 when we were working on Everipedia. I thought that the largest market cap potential outside of BTC itself is an algorithmic stablecoin. It might sound crazy, but I think that the best chance any protocol has at becoming larger than the native asset of a blockchain is an algorithmic stablecoin protocol. So I believe that if there is anything on ETH that has a shot at becoming more valuable than ETH itself it’s the combined market caps of FRAX+FXS. I truly think there’s a good chance if we win the algo stablecoin wars, that is highly possible. Tether and USDC are already top ranked coins and stablecoins will only continue their parabolic rise this year.

What went into building the Frax?

We’ve been working on the design and theory for almost an entire year before we got to building out the actual solidity implementation itself. I’ve been telling people about algorithmic stablecoins since early 2019, way before the idea really took off during DeFi summer. The original Basis guys were onto something important. So was Robert Sams back in 2014 with Seigniorage Shares. It’s crazy to think that none of these protocols came to being until late 2020. We didn’t have true algorithmic stablecoins until last year. Sure, Nubits, BitUSD, and all these other kinds of nascent attempts were made before. But the first true algos in my opinion were Yam, ESD, FRAX, and Basis Cash.

In terms of security, we take both economic and smart contract security very seriously. We have had some of the best people in the space take a look at the contracts. Obviously this doesn’t guarantee anything in this space as there’s hacks almost daily. But we definitely don’t deploy anything recklessly. We test extensively. We also have COVER integration for anyone wanting to have insurance on the protocol. It is unfortunate that they too were a victim of an exploit. No one is safe in this space, not even the insurance providers. Always be careful when using large amount of funds in any project. I can at least tell you that I have my own personal funds farming Frax so I am proud of our work in every way. Regardless, always exercise extreme caution.

The Frax protocol is a 2 token system which will transition to a 3 token system soon. All value in the protocol accrues to Frax Shares (FXS) holders. It is the governance token that receives all seigniorage revenue, excess collateral, and fees. Unlike ESD where the stablecoin is also the speculative asset, the FRAX stablecoin is purely money. It is not the investment asset of the system.. We have the Frax Bond (FXB) token coming out in the coming weeks which is a fixed yield asset that works differently than any other coupon/bond in the algo space. FXB is highly fungible, liquid, and will provide a different risk-return profile that I could see be used in yearn vaults and other DeFi hedging platforms. We’re very open to working with DeFi protocols that would like to reach out to integrate with us and see if the returns that FXB and FXS provide is right for them. I think yEarn, Pickle, Saffron, BarnBridge, and others are at the bleeding edge of this. We’d love to collaborate. FXB is for shorter term investment in the monetary policy of the protocol while FXS is a long position on the entire ecosystem. The entire price action in terms of growth is in holding FXS. The expansion as well as the retraction of the FRAX supply has its backbone in FXS. That’s why Frax Share holders get governance and revenue+seigniorage rights.

I think algo stablecoins are one of, if not the most, interesting parts of DeFi. Stablecoins are becoming more and more bullish in the crypto space each time there is a regulatory announcement. The recent guidance by the US government that banks can use public blockchains as infrastructure to settle stablecoin payments is basically the most bullish guidance I’ve seen for the space in all of my 7 years of involvement. Truly I think people are sleeping on the implications of that and it can’t be overstated. That also bodes extremely well for algorithmic brethren of fiatcoins. In the next year, I think stablecoins are going to be the most accepted crypto asset from a regulatory perspective.

To put it clearly, we want FRAX to have over 1 billion tokens in circulation powering the DeFi economy like DAI and USDC does, except FRAX will have a large amount of its supply algorithmically stabilized and unbacked. From there, I think it would be indisputable that we are the “Bitcoin of algo coins” and leader in the space. So far, we are almost 10% of the way to our 1 billion FRAX goal. We are also top 10 in Uniswap liquidity just 3 weeks since launch. That I think our innovative design has helped inspire a lot of algorithmic projects to follow us in experimenting with fractional-algorithmic mechanisms. We love the experimentation and support any project that is inspired to improve the Frax design. We’ve been friendly and helpful to other algos in the space including Basis Cash (I’m a fan!) and ESD (their v2 has a lot of similarities to Frax’s design which is exciting).

I really think DeFi is what is actually a catalyst for the current bull market. Obviously the BTC/hyperinflation narrative is strong and leading the charge, but without the ability to perform complex financial logic onchain, the total crypto market cap would not be anywhere near the $1T that it is now. By next year, I’m confident that we’ll see at least 1-2 algorithmic stablecoins with over $1B in stablecoin supply being used in the space. FRAX is already 10% of the way there right now. It’s going to be an incredible year for all parts of crypto in my opinion, especially algo coins.

The Defiprime Post #7: Your Weekly DeFi News in Bite-Sized Fashion

Oliver, co-founder of StakeWith.Us talks about infrastructure and scalability built around adoption driven projects, staking-as-a-service providers and the future of DeFi.