What’re NFT Index Funds? Find it out in our interview with NFTX core contributor ChopChop.

Hey! My name is ChopChop (often referred to as Chop), the first core contributor who joined the NFTX DAO after the successful launch by Alex Gausman in early 2021.

My interest in crypto really started growing due to friends recommending me to read The Internet of Money by Antonopoulos. While I operate as an anonymous contributor in the DeFi & NFT scene now, I have been operational within DeFi for the past 5~ years, both being highly active in many of the 2016-2017 era communities as well as working for an extended period at one of the more popular companies since 2017. I’ve started contributing to communities anonymously as Chop during the DeFi summer of 2020 to help out SushiSwap. Fast forward 6 months I joined NFTX as a core contributor.

With NFTX, our main mission is to bring more liquidity towards the (often highly illiquid) NFT scene by acting as a bridge towards DeFi composability, making NFTs productive along the way.

Simply said, NFTX is a protocol built on top of Ethereum which lets you deposit your NFT collections into vaults, giving you back an ERC20 token to be utilized as a composable money lego in the broader DeFi ecosystem. This means you can utilize your NFTs as collateral for anything the DeFi ecosystem offers: ranging from creating liquid NFT pools on i.e. Uni/SushiSwap/Balancer, using your NFTs as collateral in lending/borrowing protocols, add them as collateral for index products such as PieDAO / Indexed and so forth. 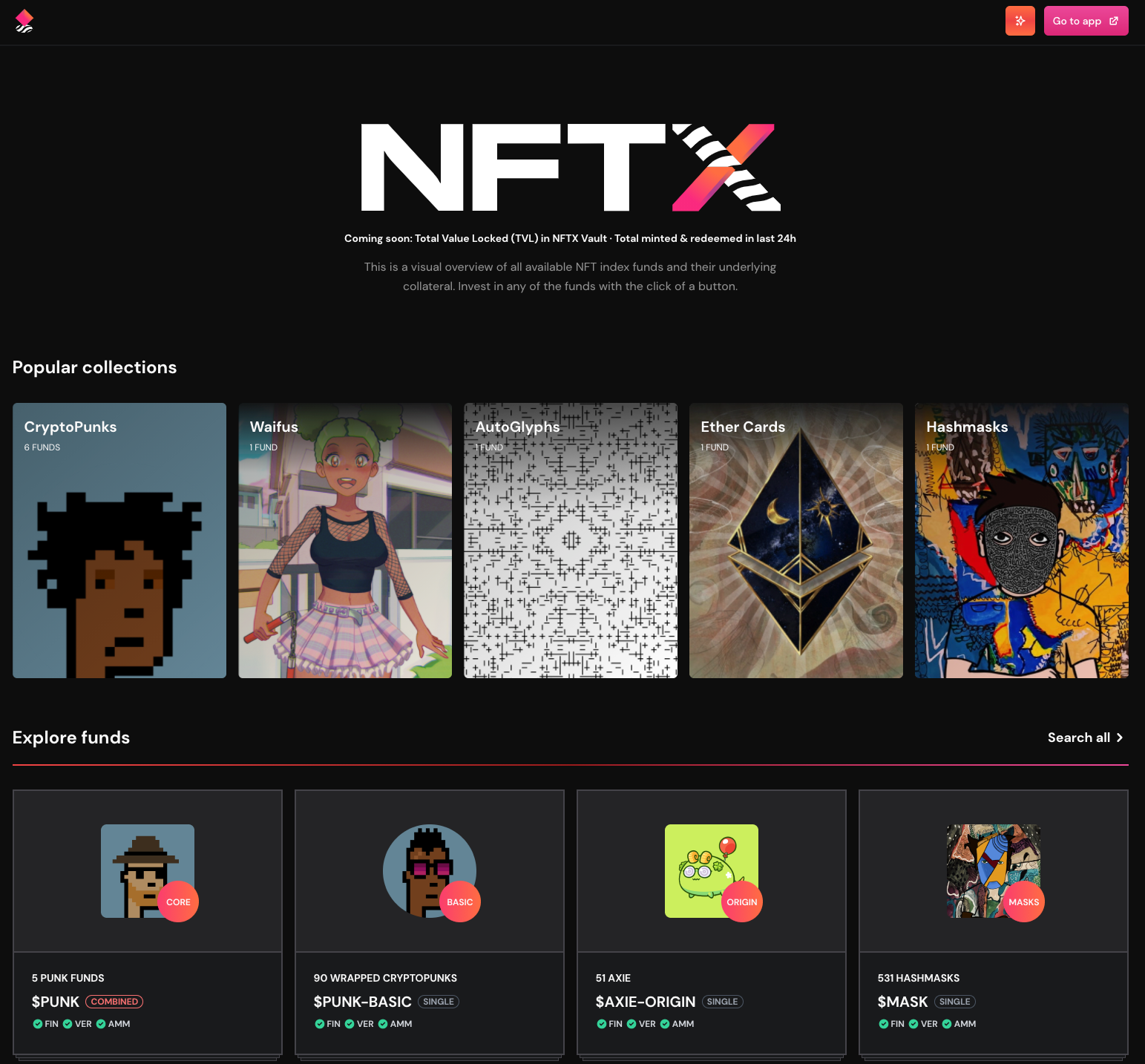 During DeFi summer in 2020, while I was bootstrapping communities for fun, I slowly became part of a highly active group of anons & non-anons spread across a couple of Discord channels, all helping each other out with questions & in-progress projects. Alex was in one of these groups and invited me, after which I’ve been more actively following what he was working on (I believe it was called Punk Farm during that time).

Nearing release of the first phase of NFTX, which was dubbed the community raise, I started to be more involved with the ecosystem by setting up a lot of the early communication channels and creating educational content for them (i.e. FAQ/blog posts), and helping out lots on the organization side of things together with a handful of other contributors.

As I mentioned the community raise: a large amount of the governance tokens for the DAO, going by the NFTX ticker, were distributed to early participants in a community raise where people could supply high quality NFTs such as CryptoPunks & Autoglyphs in return of NFTX. This is how the DAO bootstrapped their treasury, which is mostly used for acting as a liquidity provider for our own products on Sushiswap.

Having these deep positions in terms of liquidity puts us in an exceptional spot to act as the main protocol bringing valuable NFTs to the DeFi scene.

What went into building NFTX?

Alex spent about 4 months of full-time work building version 1 of NFTX. Originally the project began under the name PunkFund and was designed to only have a single floor fund for CryptoPunks. Development began in Fall of 2020 and it was after the first “NFT bull market” that Alex decided to expand the scope of the project to allow for anyone to permisionlessly create their own vaults. A number of features were also added, including the ability for funds to have customized “eligibility lists” which enabled collection subsets (e.g. CryptoPunk zombies) to get targeted specifically.

Alex hired LevelK to perform a security audit on the contract in December. During the audit, it was suggested to Alex that his idea would not work very well, but he requested that the audit continue regardless. In the end, a number of low-level concerns were raised, but no glaring exploits were found, so the audit was publicized and the contracts were deployed using an UpgradeabilityProxy which allows upgrades to occur via the NFTX Dao.

The NFTX Dao was setup in late 2020 using Aragon, first on the Rinkeby testnet and then later on the Ethereum mainnet. The NFTX Dao controls all assets in our treasury and also controls the ability to upgrade the NFTX protocol contracts. Despite the ease of setting up an Aragon Dao, a lot of thought went into the governance parameters as well as the general tokenomics and core values of the NFTX open-org. In many ways, this is the most difficult aspect to get right but fortunately everything went quite well with the launch. Alex believes one of the key factors in NFTX’s early success was requiring people to use the platform in order to take part in the capital raise, as the bootstrapped the protocol and initial liquidity requirements.

With the NFTX DAO building both a protocol and interface to interact with the protocol, we’ve enabled fee capture on minting & redeeming of NFTs in/out of the vault in the second iteration of the protocol. This means that for any NFT that is put into (or taken out of) the vault, a percentage flows back as revenue to bootstrappers / liquidity providers of the vault. Specific redeems of NFTs from the vault (bypassing the random redemption process) will take a premium of 10%, also paid back to bootstrappers & liquidity providers of the vault.

Other ways in which the DAO currently generates revenue is through acting as an NFT liquidity provider on AMMs capturing trading volume fees, as well as using incentive programs such as Sushi’s Onsen

The regulatory landscape is ever evolving and right now looks rather positive from what I can see, enabling bigger payment processors to interact with decentralized currencies. As long as regulators do their best to not block innovation by making uninformed decisions, we should all benefit.

With the major overhaul through a second iteration of the protocol enabling value capture and the main interface having received a complete overhaul, we will work on expanding the NFTX ecosystem through building multiple products in parallel for multiple target audiences, being developers, liquidity providers, and retail NFT collectors/traders.

On expanding the NFTX ecosystem; one great example is Hyype, which is an independent project team which has received a grant from the NFTX DAO to build a social platform for NFT owners that want to showcase and share their collectibles, while allowing trade functionalities on its platform (including utilizing liquidity pools from NFTX).

Our main priority is extending NFTXs’ protocol utility into as many verticals as possible, both through collaboration with other projects as well as building core interface products ourselves.

In my opinion, DeFi is primed (no pun intended) to take over TradFi over time now that the early projects coming from ‘16-17 have had the time to build out & verify solid use cases (i.e. Aave, Chainlink, MakerDAO) and some newer ones utilizing these primitives for more advanced implementations (i.e. Yearn).

For me, I’d love to see projects focus more on the UI/UX side of things in the upcoming years, to be equal or better as CeFi alternatives. We’re still miles away from me comfortably pitching the DeFi ecosystem to my mother without fearing that she’d lose all her money through suboptimal UX.

Please join the NFTX community on:

What is decentralization in terms of a DAO, and how can we measure it?

The Defiprime Post #111: Your Weekly DeFi News in Bite-Sized Fashion