Hi, I’m Tian, one of the founders of DDEX. I started as an engineer at Microsoft, then founded two startups during the mobile internet era. In early 2017 I was doing a residency for a VC firm and had a lot of free time to look into bitcoin and ethereum programming.

DDEX is a decentralized exchange built on the Hydro protocol. Our initial users are those who find it more convenient to transact directly via their MetaMask or Ledger wallet. Since the rise of DeFi, we also have a lot of API users that perform inter-protocol arbitrage, for example, people who play the “liquidation games” on Maker CDPs and other decentralized lending pools often use DDEX’s on-chain liquidity. 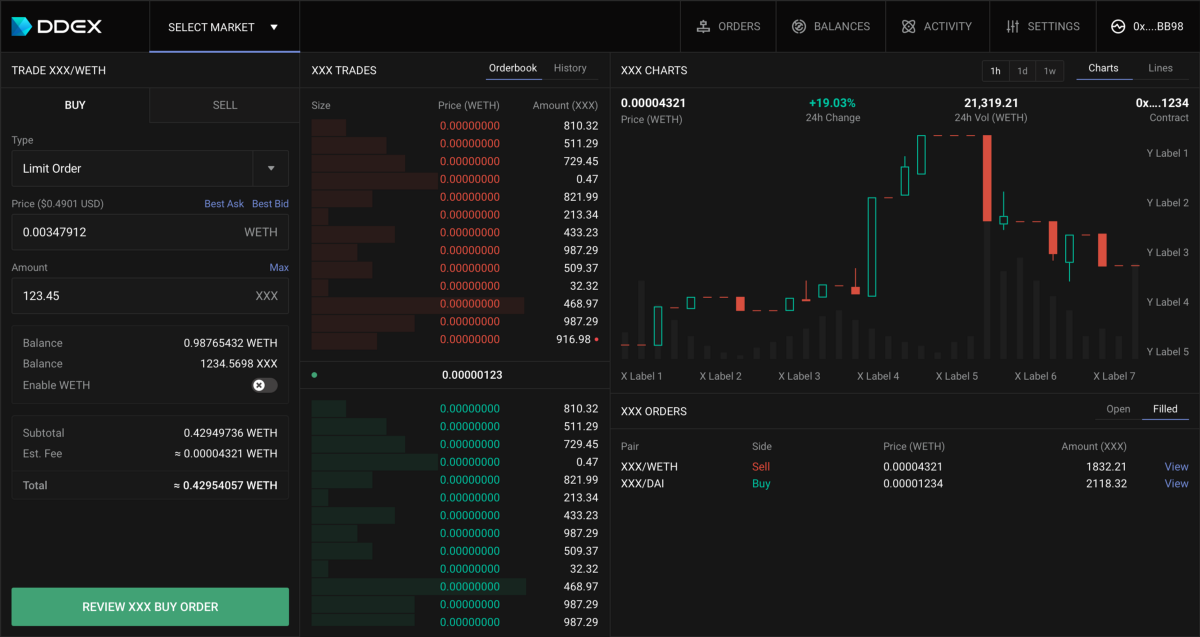 In late 2017, we found an arbitrage idea that can make money on EtherDelta by taking advantage of slow on-chain cancelation. Naturally, curiosity led us to ask: If we were EtherDelta, how would we fix this loophole and make it 10x better? So we spent six weeks building a minimal viable DEX based on 0x.

What were your motivations to build DDEX?

Trustless computers are awesome, and we want to build something that actually takes advantage of smart contracts. In late 2017, there were an infinite amount of “blockchain ideas” floating around, but very few that justified the need for decentralization. Decentralized exchange is of the rare exceptions. It’s also a full stack project with on-chain, off-chain, and algorithmic challenges. We can leverage what we are already good at (product and general engineering), while still having the opportunity to get good at new skills such as solidity and quant.

What went into building the DDEX?

The initial MVP version took only six weeks, with a Node.js matching engine and 0x as the exchange contract.

We launched in early 2018 into a crazy market. At the time, only 3 DEXs were running off-chain matching, and it proved to be a huge advantage in terms of ability to channeling liquidity. By June 2018 we were dex #1 on 0x and top 3 on Ethereum overall. Then the market crashed, and everyone’s growth kind of stopped.

The downturn was a blessing for two reasons. It gave us time to rewrite a much more robust off-chain engine in golang, and replace 0x with our own protocol Hydro. It also gave us time to breathe and survey the changing landscape. The main realization is that DeFi is going to generate new assets, capabilities, and demands for decentralized marketplaces.

When we first started, we just wanted to make one thing better than existing DEXs. First generation DEXs simply prioritized orders via the block gas auction mechanism, which is unfair and un-intuitive. We solved this by building an off-chain matching engine.

We decided to make the UI intuitive and familiar, and not try to innovate on too many things at once.

Most of DDEX and Hydro is in react, golang, solidity. We’ve open sourced a lot of it at https://github.com/HydroProtocol

How you handled security in the DDEX, how safe is it?

Like everyone else, we rely on professional audits, bounties, and a lot of testing. In addition, our philosophy is to keep the smart contract layer as simple as possible. We looked into the history of major exploits on ethereum, and a lot of it is from premature abstraction and over-architecturing. It’s important to stay humble and not get too fancy.

What about people and products that helped you out?

Our investors have been super helpful this entire time. We’ve also occasionally really good advice from other Ethereum developers such as 0x, Decentraland, dydx, Compound, WalletConnect, and Maker. Perhaps surprisingly, some of the top centralized exchanges have been curious, encouraging, and helpful along the way as well.

What do you think about the technical limitations of blockchains?

A lot of people believe the speed of the underlying blockchain is the bottleneck. But most dapps doesn’t even hit that bottleneck. I’m optimistic that clever engineering (such as moving things that don’t need to be on-chain out of smart contracts) and layer 2 scaling can go a long way.

For DDEX, we keep it simple and charge a small portion of transaction volume. Our smart contract Hydro is open source and forever free. Anyone can build on top of it with no strings attached.

How and when you started charging and got early customers?

We started charging on day one. A lot of companies try to compete on free, but we don’t like that strategy. We believe that a product must have at least one unique value proposition that customers are happy to pay for. If free is the only thing you can offer, you don’t have much to offer at all.

Who are the competitors? How you differentiate?

Our competitors are other order-book based peer to peer decentralized exchanges. We focus on liquidity as our key differentiator. Hydro Protocol’s key design pillars(off-chain matching, free order cancelation, market orders) all optimize for liquidity.

Who is the Target Market for your product?

In the beginning, our target market is customers who control their own Ethereum wallet. If Coinbase is your only wallet, then it’s probably too early for you to try out DeFi products. But if you’ve already taken the effort to learn about private key management, and have experienced the joy of self-custody, then DDEX is a great exchange for you.

On the SDK side, anyone who wants to build a decentralized marketplace. At this point, it makes little sense for entrepreneurs to create another centralized exchange. There are already thousands of them, the burden of custody is soul-crushing, and you are never going to differentiate enough to compete with Binance. So why not take a chance and bet on future tech?

A thorough understanding of the regulatory landscape is extremely important. It shouldn’t just be about reading between the fine prints tough, but a first principal understanding of what matters.

For example, why are exchanges regulated in the first place? The two big reasons are exit scamming and money laundering. That puts DEXs in a great starting position because non-custodialship means exit scamming is impossible. Furthermore, because every transaction is transparent and on-chain, decentralized exchanges do not break linkability(the essential “feature” of a mixer). This doesn’t mean DEXs can just ignore compliance, but these properties are long term advantages to build upon.

Despite the progress DEXs and DeFi projects have made in the last year, they are still less than 0.5% of the market. I think it’s very realistic that someday we’ll get to at least 50/50 against centralized counterparts, so that’s at least another 2 orders of magnitude to strive for. We want to play a core part of this growth.

Along the way, we’d like to stay ramen profitable. Real revenue is hard, which keeps us grounded and humble. We want to be an early stage startup inside and out, at least until we’ve built something significant.

So if you are going to keep decentralization and security as pillars of design, then “low-frequency high value” like DeFi makes the perfect early use-case. I mean if you just take a look at dexs, stablecoins, and lending, it’s obvious that these things are exactly what smart contracts are made for.

Looking ahead, one of the most fascinating aspects of DeFi is how will competition and collaboration between projects play out. The common saying is that DeFi projects are like Lego blocks, and they all sort of interoperate and play nice with each other. I think that’s a serious oversimplification.

Some DeFi projects are perfectly cooperative(for example DEXs and stablecoins), but others are more complicated. For example, decentralized lending and decentralized margin products are completely dependent on one another, but it is unclear whether they can co-exist as separate projects or whether one will assimilate the other.

I also wonder will be the consensus set of metrics to measure DeFi projects by. DAU as a primary metric is a web 2.0 concept that doesn’t translate well to this space.

Nodar told us how he started DeFiZap, shared his future plans and thoughts on global challenges and opportunities for the DeFi space

Decentralized Finance: 5 Things You Should Know About DeFi

Decentralized finance has a real chance to ease people’s pain around money.

Inje Yeo, Co-Founder of Set talks about a mission to make wealth management accessible to the world.