CryptoWars: Intersection of DeFi and Gaming

CryptoWarsOU co-founder told us about gamification of liquidity farming mechanics, and how they built a novel project on the intersection of DeFi and gaming industry.

Disclosure: This article was sponsored by CryptoWarsOU.

Hi, I am Vitaliy, the product manager, BDO, and co-founder of CryptoWarsOU. I was working as a smart contract consultant and was engaged in blockchain since 2015. I was focused on smart contracts development, implementation of upgradability mechanisms for security requirements, and dApp-centric security audits, optimizations, and bug fixing.

CryptoWars is a decentralized platform that was developed to gamify liquidity mining that lets you have some rest and earn while playing. Our platform adopts a modular design. Modularity refers to the combination of various elements of the product to form a subsystem with specific functions. There are four main modules in CryptoWars:

CryptoWars Game uniqueness is at the intersection of gaming and earning money at the same time. Have you ever imagined playing the game with your favorite hero and farming CW tokens simultaneously? CryptoWars suggests this opportunity even for the most demanding and experienced gamers. While playing the game the users earn their bets multiplied by two (x2) in case of winning and receive additional awards with CWT tokens regardless of the outcome of the battle.

We’ve implemented the classic DeFi business model that allows users to farm CWT providing liquidity on Uniswap and also farming in stablecoin and BTC pools on Curve.fi. Our valuable customers have an opportunity to earn on potential BTC growth, receive Curve.fi project tokens, and our CWT tokens.

CryptoWars is going to launch the open NFT ecosystem that invites customers to the blockchain space with a wide range of functionality. Every user can take part in an NFT auction, trading, and supporting the lifecycle of an NFT. This module allows customers to take part in the NFT auction and earn money every time when someone outbids his bet. Along with that, there’s an opportunity to use unique NFT game skins while playing CryptoWars and to trade them with other players on our platform.

CWT is a token owned by the community that allows users to take part in the project development by sharing their own ideas and voting for the ideas of other users.

Let’s talk a bit about the advantages of our project and what actually makes us stand from the crowd of our competitors. The uniqueness of our CryptoWars project is in the beautiful compilation of the gaming and earning process. Users can play with each other and earn cryptocurrency simultaneously. The whole funds’ movement process is transparently visible in the blockchain as making bets and prize payouts for winners are fully automated and regulated by smart contracts (unlike classical crypto-casinos where people are obliged to entrust their funds to the platform and play with scripts). 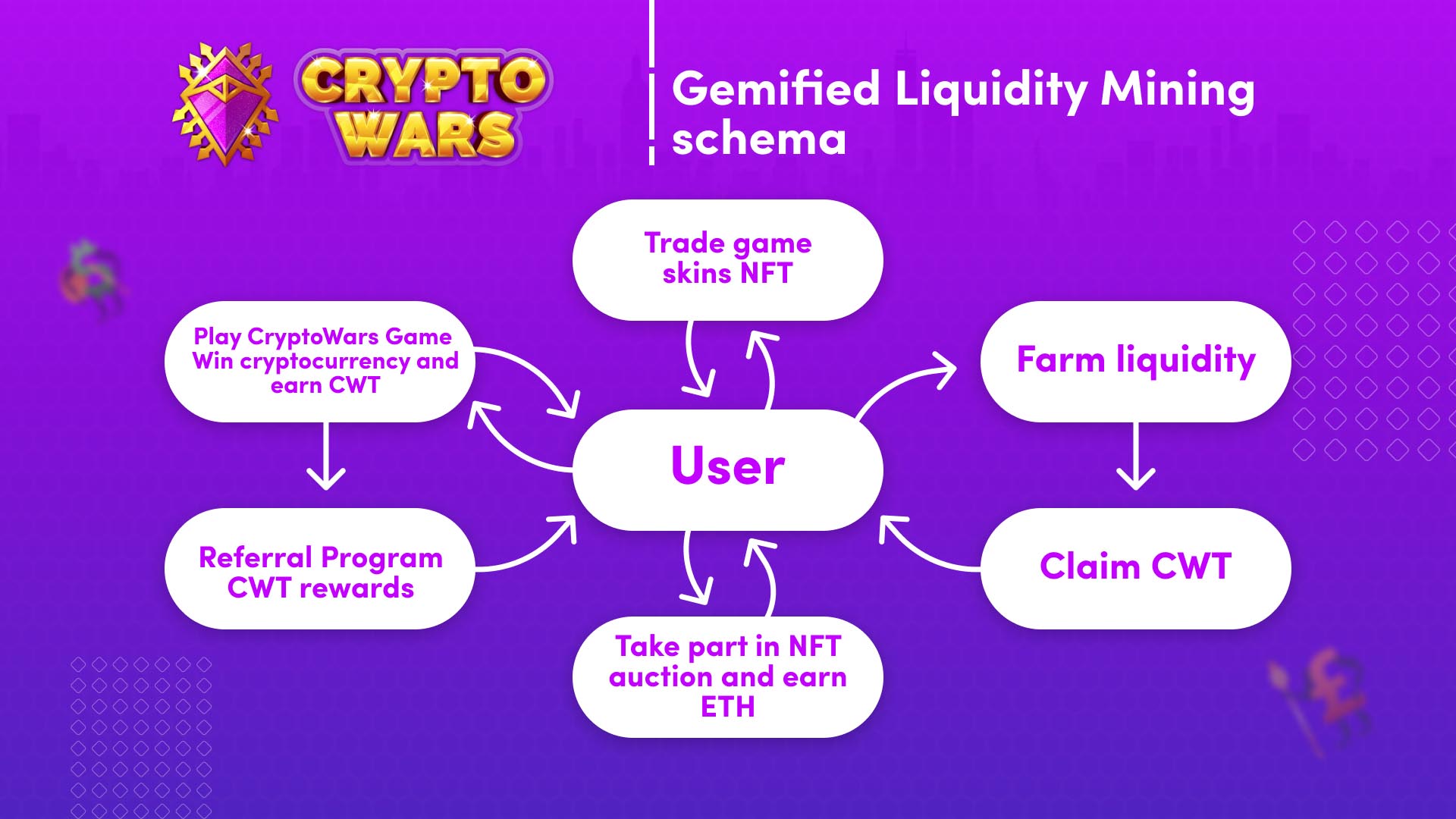 The story of CryptoWars launching is pretty interesting. Eventually, I had a conversation with my mate from the classical gambling industry. He has shared his opinion on various topics and made a statement that it became a lot more complicated to retain the customer as the classical approaches show less efficiency. The traffic volume decreases every month contrary to the price for the customer which is drastically increasing.

Due to the fact that I have pretty solid expertise within the blockchain niche, I came up with the idea of creating a product at the intersection of two worlds, gambling and blockchain. That’s when the idea of CryptoWars has emerged. We’ve started our work on the project back in 2018 with an alpha-version of the product that you can see in our first promo footage. When the DeFi boom occurred we realized that it’s perfect timing for CryptoWars.

We were demonstrating the alpha version of our game to our colleagues and mates, they were literally amazed. Also, we’ve demonstrated our product to various representatives of various gaming business niches and it was highly ranked by one of our colleagues from the poker business.

Considering the launching of our project, we started the development of the alpha-version of the product at the beginning of 2018. The latest released version as seen today is a result of the work we’ve done.

We’ve been witnessing the ups and downs of the DeFi industry. From the very beginning of the CryptoWars project development, we’ve seen the end of the ICO era and the rise of the IEO. We’ve observed the interest of the customers shifting from IEO to classical spotting cryptocurrency trading, then on cryptocurrency derivatives trading, and finally on the DeFi boom at the Spring/Summer of 2020. Few words about credibility. Since I have a lot of expertise in smart contracts development, implementation of upgradability mechanisms for security requirements, and dApps security audit, optimizations, and bug fixing we have placed a lot of emphasis on the security of our smart contracts. We conduct an internal audit of each smart contract and also plan to engage independent auditors in the near future to review our contracts. But since our smart contracts related to liquidity production are mainly forks of projects such as Synthetix and Curve, their safety has been confirmed by the experience of these projects.

Despite the transparency and trustworthiness of CryptoWars projects, there might be still some hesitations and doubts among our customers. Due to the huge amount of scams on the DeFi market, many people are quite skeptical about new projects. But we believe that people know how to separate the wheat from the chaff and at least devote some of their time to study our project.

Our business model is pretty unique and outstanding. I bet there are not so many projects with the ability of gaming and earning money at the same time. Monetization by deducting commissions for each battle + commissions during auctions and trading NFT tokens.

Today there are hundreds or even thousands of projects on the market that provide the opportunity to farm their tokens, but 95% of them have no product other than their own token. We have a product, it is a game and NFT game skins exchange that is coming soon.

Considering our main customer, our target audience is DeFi users as well as online casino players and NFT token collectors from all over the world.

Along with the American and European market, we are also planning to enter the Asian market, since our demo product has received positive reviews from Asian market representatives. Moreover, we see a lack of new ideas in the gaming and DeFi market in Asia. We plan to attract 50,000 - 100,000 users by spring 2020 and over 1 million users by summer 2020. It is difficult for us to name our goals for the profitability of our project since we are focused on ensuring that our product is profitable for our users and our plans are mainly heading in this direction. Our platform provides several ways of monetization for our clients, such as:

What are your future thoughts on the DeFi market?

The DeFi market is still too young to make any predictions, but one thing is for sure, DeFi is one of the fundamental offshoots in blockchain technology and a huge market segment that will grow rapidly over the next few years.

The Lien Protocol team talks about their new stablecoin system, which doesn’t require over-collateralization or governance

Ororo shared Sovryn backstory, and told us how they are building a bitcoin-based DeFi platform for seamless lending and borrowing