On May 9, 2019, at the Fluidity Summit in New York City, Uniswap announced Unisocks, a limited edition pair of socks utilizing a bonding curve as its pricing mechanism. To facilitate ease of trading, Uniswap created SOCKS, an ERC-20 token representing a pair of Unisocks. Users can freely trade SOCKS on Uniswap or redeem them to receive the physical pair of socks. 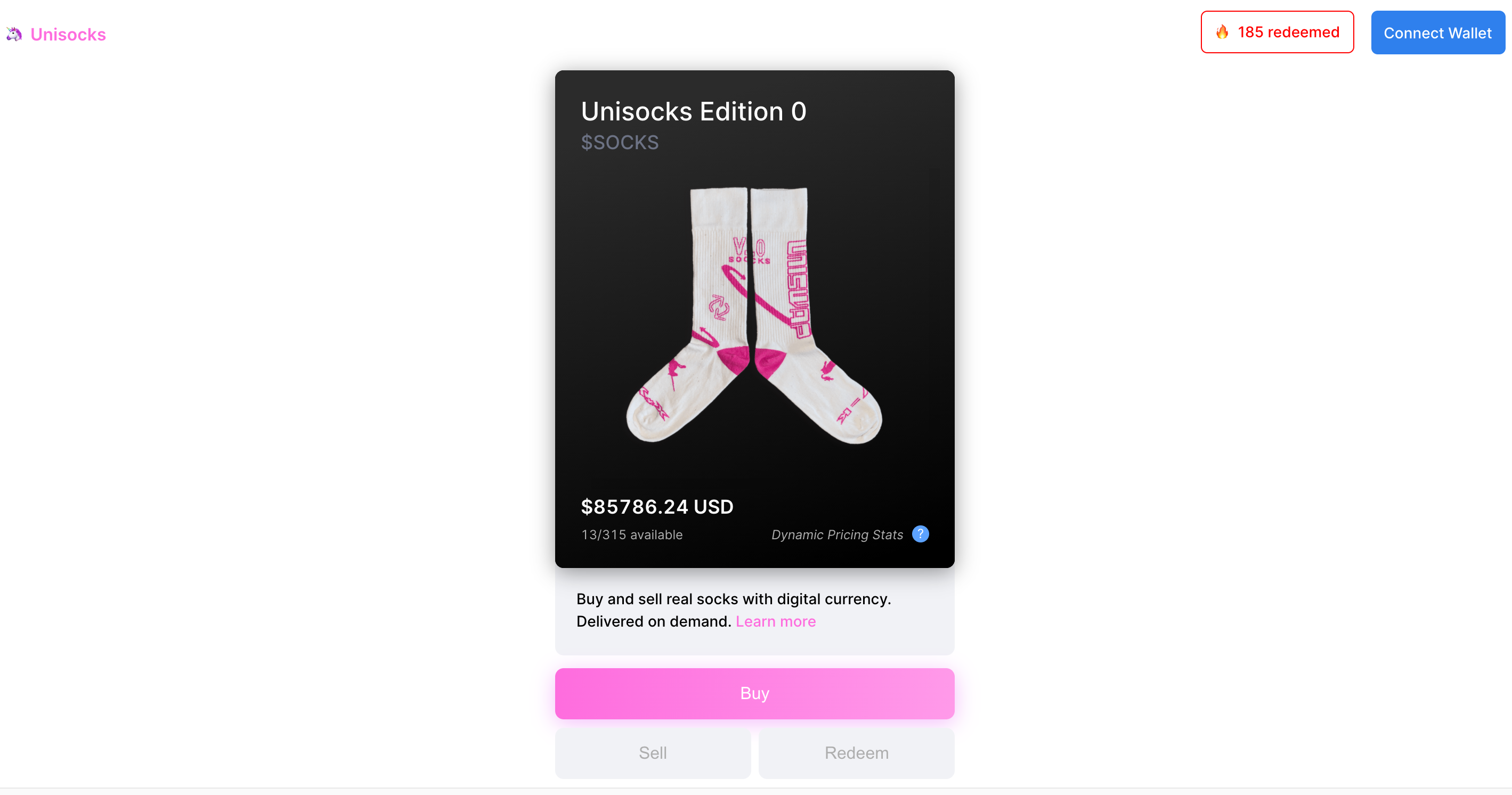 Uniswap initially minted 500 SOCKS and deposited them into a liquidity pool with 35 ETH. Since its inception, 185 SOCKS have been burnt and taken out of circulation. Today, out of the 315 SOCKS still in circulation, only 14 remain in the liquidity pool. Uniswap initially intended to burn the unsold SOCKS after at least 100 days; however, they never went through with these plans.

When Uniswap released their governance token UNI, they even allocated 220,000 UNI to SOCKS holders and redeemers. Uniswap distributed 1000 UNI to each address that previously redeemed or held a SOCKS token at the snapshot date.

How do Bonding Curves Work?

Instead of selling SOCKS at a fixed price and allowing the secondary market to determine their value, Uniswap chose to utilize a bonding curve for a dynamic pricing mechanism. In short, bonding curves allow for a token’s price to be a function of its supply. Every time a token is bought, the following tokens’ price increases at a rate specified by the curve.

For example, a basic linear bonding curve could be price = supply. For SOCKS, this would mean that the first token could be purchased for $1, while the last token would go for $500. While this example is relatively simple, developers can customize bonding curves to fit whatever strategy they desire.

Developers can also use bonding curves to incentivize early adopters. At the time of writing, SOCKS are trading right around $65,000! That’s more than 5,400x its original price of $12. SOCKS’ bonding curve is pretty extreme since the 499th pair will cost 8,750 ETH, and the final pair will cost more than all the ETH in existence. 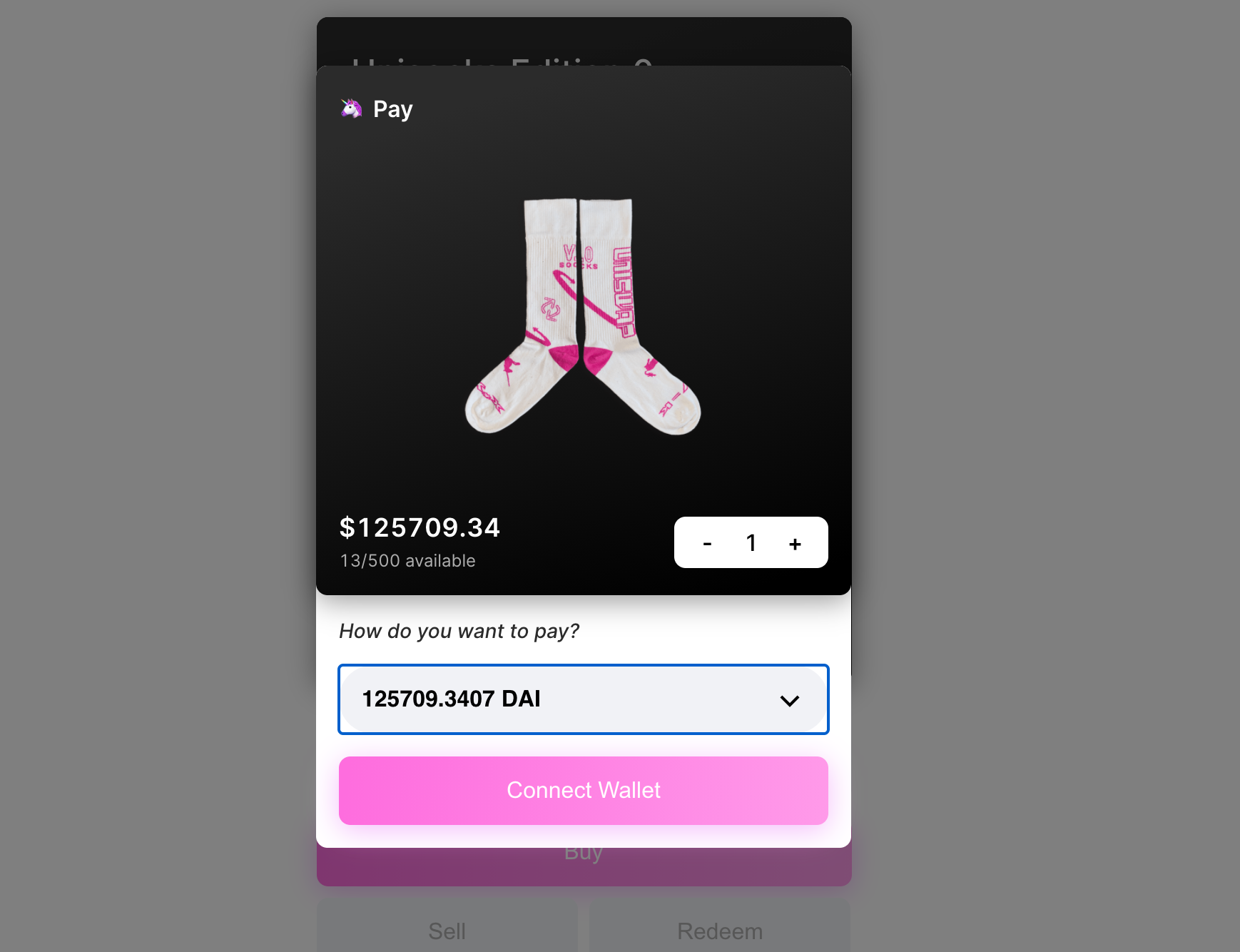 Because SOCKS are ERC-20 tokens, they can be used like any other ERC-20 token on Ethereum. Uniswap created an initial liquidity pool of 500 SOCKS and 35 ETH to facilitate trading; however, anyone can make a pool with SOCKS. Users have already made alternative Uniswap pools, including DAI/SOCKS and USDC/SOCKS. Because of the permissionless nature of DeFi, anyone can take it a step further and use SOCKS across other DeFi protocols.

When a SOCKS holder wants to redeem their token for a physical pair of Unisocks, the token is burned, reducing the number in circulation. While holders might be hesitant to burn their tokens to receive a nondurable good like a pair of socks, Uniswap incentivizes holders by sending them an NFT once they’ve redeemed SOCKS.

Unlike physical items, which really can’t be displayed to a large audience, the Unisocks NFT enables SOCKS redeemers to show their ownership across the internet, especially with platforms like Showtime, Gallery, and Lazy.com building out ways to showcase NFTs.

One question for future consideration is what is the value of the NFT? Is the NFT reliant on being paired with the physical pair of socks, or does that not matter? Is the SOCKS token worth more or less since it acts as an ownership claim rather than actual ownership?

Why Do People Buy Unisocks?

People ultimately choose to buy Unisocks for a variety of reasons. While some people may still buy SOCKS to redeem them for a physical pair, this is becoming less likely, especially as prices have skyrocketed over the past few months. Therefore, I would classify purchase intentions into two categories:

Over the past year, the price of SOCKS has risen from $55 to over $164,000 at the beginning of March. Since anyone can buy/sell SOCKS from/to the liquidity pool at any time, the price will continue to move until reaching equilibrium, where supply = demand. As the number of SOCKS that remains decreases, buying/selling even one token can dramatically impact prices.

Those interested in getting exposure to SOCKS, but don’t necessarily want to buy one full SOCK, can purchase via DEXes with SOCKS liquidity pools. Additionally, PieDAO’s recently released PLAY index contains SOCKS as one of its 14 assets.

On top of price speculation, people purchase SOCKS believing they will be an important part of internet culture.

While Unisocks may have initially been released as an experimental project, they have inspired many others over the past few years. Marketplaces like Zora, Foundation, and Saint Fame DAO, have used bonding curves to price scarce physical goods and objects.

On top of innovations from their pricing mechanisms, we have also seen a community rally behind SOCKS to the point where people are willing to take out loans with SOCKS as collateral. Earlier this month, Rari Capital released Fuse, allowing the creation of permissionless lending/borrowing markets. One of Fuse’s pools is made up of SOCKS, ETH, DAI. Users have already deposited 7.2 SOCKS into the pool and are earning 2.02% APY!

It will be interesting to watch how projects experiment with bonding curves and how high SOCKS’ price can go. 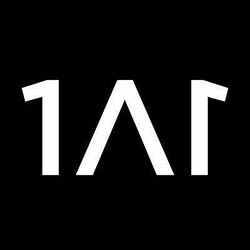 About the author
Austin Ryan
Austin is a DeFi enthusiast based out of San Francisco, CA. In additional to his day job, he currently writes a daily newsletter called Bacon, Eggs, and DeFi and researches DEXes. Austin holds various cryptocurrencies and NFTs.

The Defiprime Post #30: Your Weekly DeFi News in Bite-Sized Fashion

Application of IAD Principles to the DAO structure

The Defiprime Post #29: Your Weekly DeFi News in Bite-Sized Fashion

Here are defiprime’s 2020 DeFi Persons of the Year, starting with our pick for the year’s most pivotal builder