Brian Norton talks about building a new version of MEW and sharing his thoughts on the future of DeFi and dApps space at Ethereum.

Hi! My name is Brian Norton, and I’m the COO of MyEtherWallet.

MyEtherWallet (MEW) is a client-side interface for interacting with the Ethereum Blockchain. One of the first such interfaces of its kind, MEW allows users to create and unlock wallets, interact with popular hardware wallets such as Trezor and Ledger, send transactions, interact with contracts, swap tokens, and interact with dApps.

I began working with Kosala, the founder, in 2017 - around the time he was beginning work on an open-source ethereum block explorer. In early 2018, we relaunched MEW and brought that project - EthVM, which is currently in beta - under the MEW umbrella.

Since then, we’ve been working hard to expand our product offering so that our users can get a fuller view of what is on offer in the Ethereum space. We think that dApps - from non-fungible tokens to DeFi and payment solutions - can be real game-changers for both personal finance and enterprise solutions if we can only educate users on how they work, and provide a safe and easy-to-use environment to experiment with them. 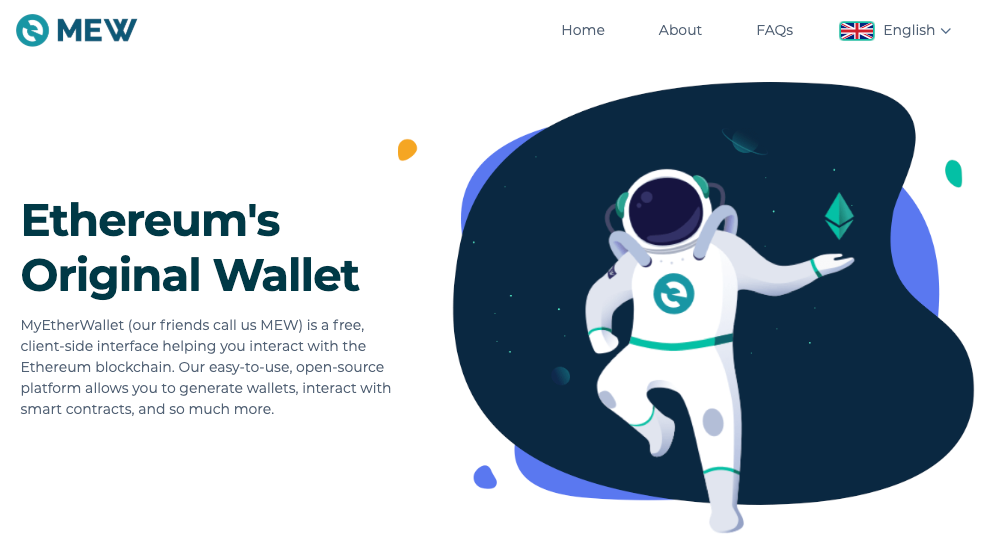 MyEtherWallet was started in 2015, about a month after the Ethereum blockchain launched on the mainnet. Since then, MEW has amassed an estimated 1.2 million monthly users.

At the beginning, MEW started as a side hustle; a hobby for the co-founders to help the average user interact with the blockchain without having to generate or unlock their wallet from the command line.

Over the years, MyEtherWallet grew. New features have been added - hardware wallet support, exchange partners, mobile options - all building on the core principle that blockchain technology is only valuable if people can use it and build upon it.

Our aim is to make blockchain tech easier and safer to use. We’ve made big strides since 2015, but there are still a great many improvements to be made. As the technology and user needs evolve, so do we.

What went into building the updated MyEtherWallet?

MEW V5 was born out of a bit of uncertainty after MEW went through a founder’s split and fork in early 2018, and we found ourselves in need of a new team and a new direction.

Version 3 had been up and running and for a while, and we had to decide between continuing to develop the codebase for the upcoming Version 4, or forging our own path.

In the end, Kosala decided. The community deserved a choice. MyEtherWallet had been really the only interface of its kind for years, and we would be doing nothing to advance the space if we continued to offer the exact same product just to maintain market share. So we set to work on version 5.

I think one of the greatest challenges for us was that in assembling a new team, we were bringing together a lot of diverse voices with a lot of different takes on essential subjects. Graphic design, user flows, analytics - you name it, and we probably debated it. But ultimately that became the project’s greatest strength.

For the first time in its history, MyEtherWallet was getting the full attention of folks whose first concern wasn’t necessarily crypto.

Building a new team, and reimagining an already heavily relied upon resource in the space was no easy task, but it allowed us to tap into the kinds of things that might concern a new user coming to the site. It was important for us to escape the feedback loop of the vocal Ethereum community and begin to address the immediate needs of folks entering the space and attempting to find their way.

The core functions of MyEtherWallet - wallet creation, accessing the wallet, sending transactions, signing - have no fee. The same goes for dApps that don’t monetize, and instead provide a community service, like the Ethereum Name Service (ENS). We feel that if removing as many of the upfront costs as possible can create a safer and more usable experience, then we have a responsibility to the community to do just that.

Those exchanges charge fees, and a portion of those fees comes to MEW. These types of partnerships live on our swap page for some time. 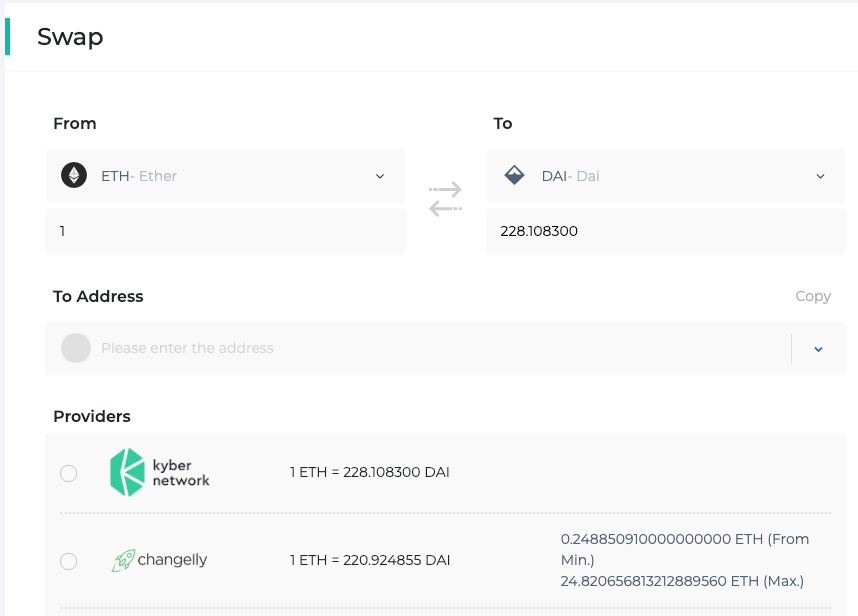 We have begun opening up our dApps page for similar types of integrations; DeFi integrations in particular, seem to be the next natural phase in our development. In my view, the space has evolved dramatically from the purely speculative FOMO sentiments of 2017.

A high percentage of users coming into the space are looking for alternatives to the traditional financial system, and we believe that MEW is well-positioned to onboard them onto these new solutions.

I think in many ways regulators, at least in the US, have been biding their time to see how the industry develops and whether it warrants action. In this sense, the Libra announcement may be a mixed blessing. Whatever you might think about Libra, Facebook has a global reach large enough to drive the level of adoption to make legislators take notice and force cryptocurrency into mainstream discourse.

The downside is that regulators may regulate for Libra without considering the wider industry that has been developing the digital asset and decentralized finance ecosystem. It is essential that we are a part of this conversation. Otherwise, we run the risk of finding our future-forward approach to financial tech being hamstrung by outmoded thinking.

Case in point, the FATF’s proposed guidelines that exchanges and wallets conform to the “travel rule.” Such a suggestion both undercuts the benefits of the technology and undermines projects by subjecting them to impossible standards.

Currently, we are gearing up for what we see as massive expansion in digital assets and DeFi in the very near future. This includes more swap offerings, more DeFi offerings on the platform, as well as support for collectibles. We’re also working closely with existing partners to ensure their own expanding offerings are available to users through MEW. 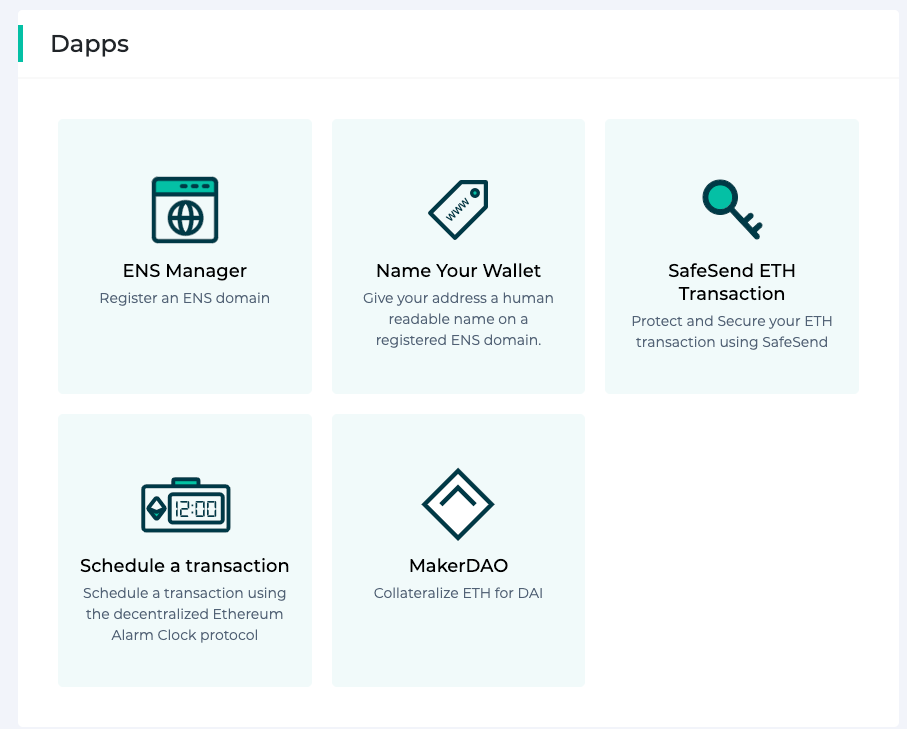 Beyond this, we’re really excited about developing our current suite of products even further to address the needs of the next generation of crypto users. We have a team led by Director of Mobile, Alex Komarov, hard at work on our next mobile offering. We laid the groundwork with MEWconnect, our hardware wallet-style mobile app, and now we’re moving toward offering folks a more robust experience, employing far more of the functionality found in the web version.

Looking it at it through a wider lens, I think many of us working in the space are beginning to see a wider mainstream interest - if not yet acceptance - of crypto and blockchain-based solutions. We in the space need to be anticipating a new influx of users; a diverse population with goals and ideologies far different from the early adopters we’re currently serving.

My goal for MyEtherWallet is to be the place for these folks to enter the decentralized future. I want MEW to be the place where legacy users, new users, and enterprise users alike can safely discover the benefits of decentralized, censorship-resistant, permissionless financial services.

Now, I realize that sounds like a lot of buzzwords, and that users may or may not care about, but it is my belief that these features offer value to users regardless of whether or not they were the value proposition that brought the user to the space.

The freedom and security offered by decentralized finance empowers users and keeps them experimenting in the space, regardless of what attracted them in the first place. If a user finds their way to MEW and finds a reason to continue exploring the blockchain, we consider that a success.

What are your thoughts for the future of the DeFi market?

I think right now is an exciting time for the DeFi ecosystem because it is expanding so rapidly, and most of us in the space realize that it is still just the beginning.

If we look at the timeline, blockchain itself is the first DeFi application, facilitating peer-to-peer payments. That moved to crowdfunding during the ICO boom, and now we’re seeing these very fascinating experiments with financial products.

Maker is of course, at the epicenter of the moment. Applying the principles of central banking to open-source, fully transparent, permissionless tech has been nothing short of a radical reimagining of what economies can look like. We’ve already integrated the CDP portal into the MEW interface, and we look forward to incorporating future offerings, especially Multi-Collateral Dai.

We also see the reimagining of payment processing through projects like xdai or in derivative markets like Augur or Veil.

I love what the folks over Aave are doing with Ethlend, and we’re excited to see the launch of decentralized lending pools that they’ve recently announced. I especially like that they’ve created a number of products with different degrees of centralization. They have an offering for payments that serves as a crypto-fiat bridge alongside their decentralized credit offerings. These sorts of bridges allow DeFi and traditional personal finance to work side by side, so the user can onboard more easily, and utilize crypto for day-to-day tasks.

The Defiprime Post #61: Your Weekly DeFi News in Bite-Sized Fashion

Benedict Chan, CTO of BitGo talks about origins of WBTC, delivering trust in digital assets and exploring the depth of the programmable ecosystem.

Loong Wang, CTO and co-founder of Ren, talks about privacy and interoperability between blockchains.