Interview with Loi Luu, CEO and co-founder of Kyber Network

Loi Luu talks about long term objectives, and how Kyber Network is going to become the transaction layer for the decentralized economy.

My name is Loi Luu, CEO and co-founder of Kyber Network.

While completing my PhD in NUS in Computer Science, I became particularly interested in the topic of Blockchain and Cryptocurrencies. Along with my early academic collaborators, some of whom ultimately became my Kyber Network co-founders, we were impressed by how fundamentally different and game-changing blockchain technology and cryptocurrencies were. In particular, the ability to run an entire global technological and economic system without relying on any centralized party felt like an entire new world. This motivated me to eventually enter the crypto industry.

Kyber’s on-chain liquidity protocol enables decentralized token swaps to be integrated into any application. For example, our in-house token swap service KyberSwap.com allows end users to seamlessly convert ETH and over 70 ERC20 tokens (including DAI, BAT, MKR) in a fast, simple, and secure way. Kyber’s protocol also aggregates liquidity from a wide range of sources known as token reserves, to provide the best available rate for users in these applications. 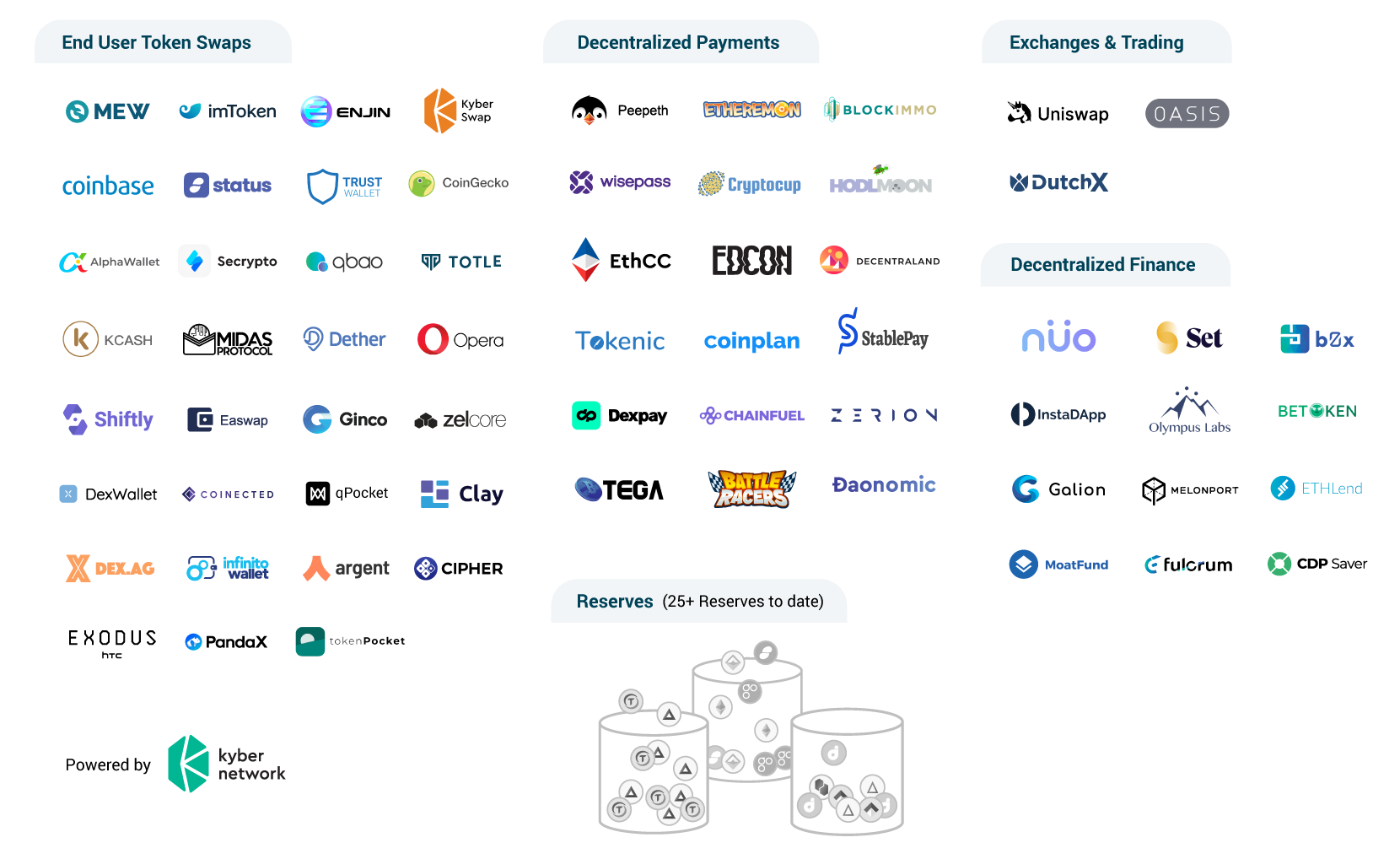 To date, there are more than 55 blockchain projects that have integrated Kyber for their liquidity needs, including popular wallets MyEtherWallet (MEW), imToken, Trust, Enjin, and HTC Exodus’s Zion Vault, as well as decentralized finance (DeFi) projects such as InstaDApp, Nuo, Set, Fulcrum, and Melonport.

My co-founders and I were initially motivated to improve the 3 foundational pillars of the blockchain world, namely decentralization, scalability and security. On security, we built Oyente, which was the first automated smart contract verification framework and one of the most used open-source auditing tools by security experts today (e.g. Melonport, Quantstamp). On decentralization, our work on Smartpool was focused on preventing over-centralization of mining pools, which made the underlying blockchain networks more secure and censorship-resistant. On scalability, our work on Elastico was the first proposed sharding solution for public blockchains and directly inspired the design of Zilliqa, currently one of the most promising scalable blockchain projects.

Over time, we wanted to work on a platform that would allow us to bring the benefits of decentralized technologies to a much bigger audience and facilitate many other real-world use cases. The key moment happened for us when a project approached us to discuss if it is possible to accept a different token in addition to Ethereum, with the intention to have common token-holders and community with another token ecosystem.

It turned out that no existing solution then addressed the problem in a practical way. The more we worked on the problem, the more we realized the potential impact of solving it. Besides removing key hurdles that hinder the adoption of decentralized technologies, it would give equal access to services and platforms to token holders regardless of which token they hold.

Since then, we sought to facilitate seamless decentralized token exchange between different projects and ecosystems. That we thought, might eventually lead to equalizing access to everyone, regardless of origin, location, power or background.

What went into building Kyber?

Building Kyber’s liquidity protocol took my team and me many months of hard-work, but it was extremely rewarding and laid the strong technical foundations for Kyber to emerge. We launched our in-house token swap service KyberSwap on the Ethereum mainnet on February, 2018, and since then our protocol has facilitated over 827,000 ETH worth of trades, powering token swaps for over 55 applications, supporting over 70 ERC20 tokens, and has more than 24 different reserves contributing liquidity to the network.

Security is one of our utmost priorities when building Kyber, and we have conducted multiple bug bounties and smart contract audits, including one with ChainSecurity.

We are very grateful for the advice and support given by our various advisors since the beginning of our journey. It was also heartening to see how enthusiastic the entire community was to ideas that aimed to fundamentally change how incumbent economies worked. This enthusiasm was the key motivation to continue developing decentralized technology and solutions, despite the presence of major hurdles given the embryonic state of the technology.

The Kyber Protocol aggregates liquidity from diverse sources called Reserves, supporting over 70 different ERC20 tokens. Each reserve has the ability to determine their own conversion rate and spread (difference between buy/sell price) for a digital asset pair through various methods.

Additionally, in order to operate and contribute liquidity, all reserves are required to pay fees in KNC (Kyber Network Crystals), Kyber’s native token. Some of these fees are awarded to integrated DApps as an incentive to help bring in volume and grow the ecosystem, while the remaining KNC are burnt as network fees (taken out of circulation forever).

We are starting to see more countries take a positive approach towards cutting-edge technology such as blockchain and cryptocurrencies.

For instance, 2018’s Vietnam Crypto Dialogue, which Kyber co-organized with Regulus, Midas Protocol, Tomochain, Kambria and Huobi Global, focused on decentralized technologies and potential regulation in the country. This was the first time that the Vietnamese government provided an official platform to actively engage blockchain projects in open discussion, and the event was heavily covered by local press and media.

The Singapore government in general has also been very forward-looking with regards to new technologies, and has started an initiative to make Singapore a ‘Smart Nation’. The Monetary Authority of Singapore (MAS) has even conducted their own experiments on distributed ledger technology in a project called Project Ubin, which helped MAS better understand the potential benefits the technology may bring through practical experimentation.

At Kyber, we are building our protocol to facilitate the conversion of cryptocurrencies in the most trustless and secure manner. Anyone can access Kyber’s documentation on our Developer Portal to integrate with the protocol, or set up a Reserve to contribute liquidity. Over time, we plan to make it even more straightforward for anyone to both access and contribute liquidity on Kyber. 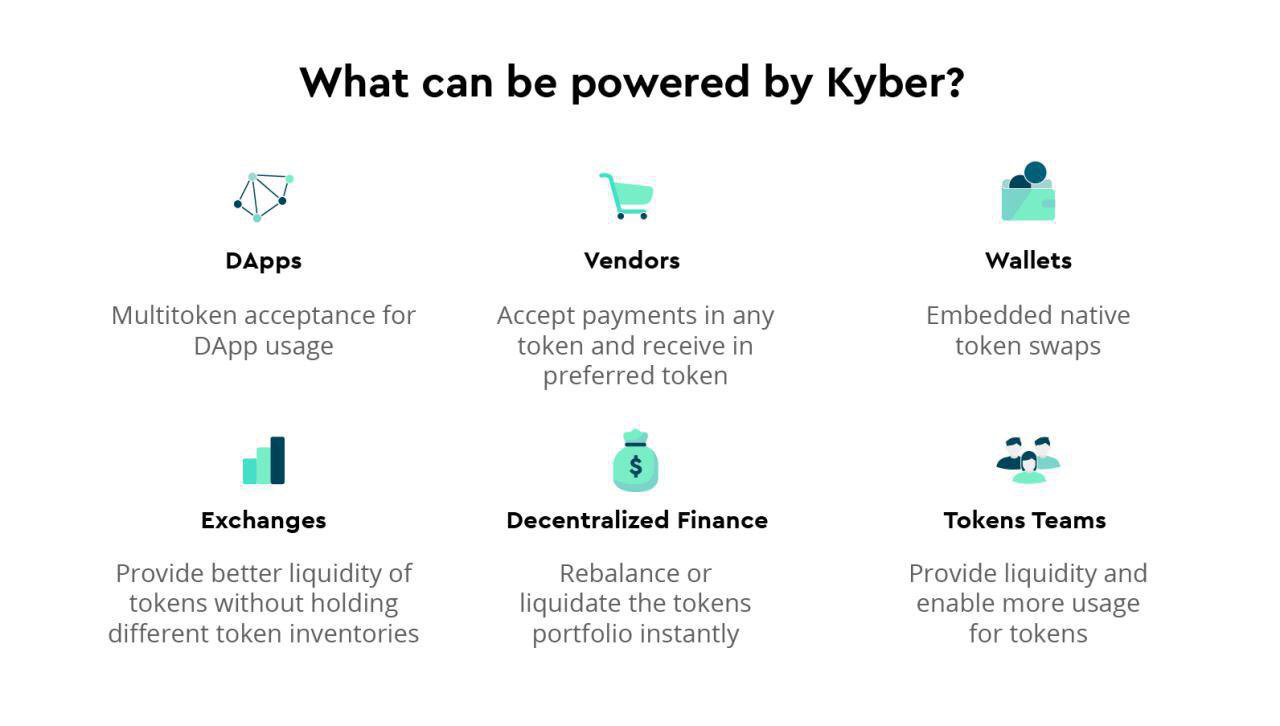 Our mission is to make any token both tradable and usable anywhere, and become the transaction layer for the decentralized economy.

Here are our Long Term Objectives:

Decentralized Finance (DeFi) can be seen as the trading and transacting of digital assets using blockchain technology, with the user in full control of his/her funds. I believe that DeFi has a huge potential to disrupt the traditional financial system, since financial intermediaries can now be removed, transactions are less prone to fraud and counterparty risks, and there is also an opportunity for greater financial inclusion. The impact of DeFi will be especially pronounced given the rapid increase in the use of smartphones and how people are getting more comfortable managing their finances online.

I foresee that with DeFi, important wealth-building and business tools such as applications involving loans, insurance, investments, and other financial services, become much more accessible to people around the world. Anyone with an internet connection and a smartphone or laptop will be able to connect to the public blockchain network, use DeFi platforms, and participate in the global digital economy.

For example, someone without a bank account in a remote region in one country, can still receive crypto payment from a client in another country thousands of miles away. This can happen in a matter of minutes, with even lower fees compared to typical remittance rates. Moreover, payment can be made without trusting any financial intermediary, as transactions on the public blockchain are censorship-resistant and verifiable.

At Kyber, we are building a protocol to facilitate the conversion of cryptocurrencies in the most trustless and secure manner. Our long term goal is to process most of the financial transactions for these applications in the decentralized world.

Nelson from Neutral talks about the first meta-stablecoin, Neutral Dollar (NUSD), and use cases for basketing stablecoins.

John Wong from the Switcheo team shared the backstory of multichain DEX and talks about perspectives of DeFi.