My name is Mark Anstead, and I first got into cryptocurrency back in 2014 when I bought my first Bitcoin, but I didn’t take a deep dive into crypto until late 2016. The event that led me to research blockchain and its benefits occurred for the wrong reasons. I was bedridden for several months, and it was during that time that I read the Bitcoin whitepaper in detail, rather than giving it the usual cursory glance. From this, I became extremely interested in distributed ledgers and how they would impact various industries - most notably finance (Fintech), Supply Chain Management, Healthcare, and IoT (Internet of Things). I was hooked and quickly started diving into projects like Ethereum, Litecoin, and other cryptocurrencies.

With a background in business, finance, and sales, I joined one of the largest cryptocurrency investing companies in the industry, Cryptocurrency Investing Network (CI Network). During this tenure, I conducted a massive amount of research into projects that were outside of the top 100 in market cap (according to CMC). My research led me to some exciting projects that were solving various challenges using blockchain technology. One of those was Hydro! 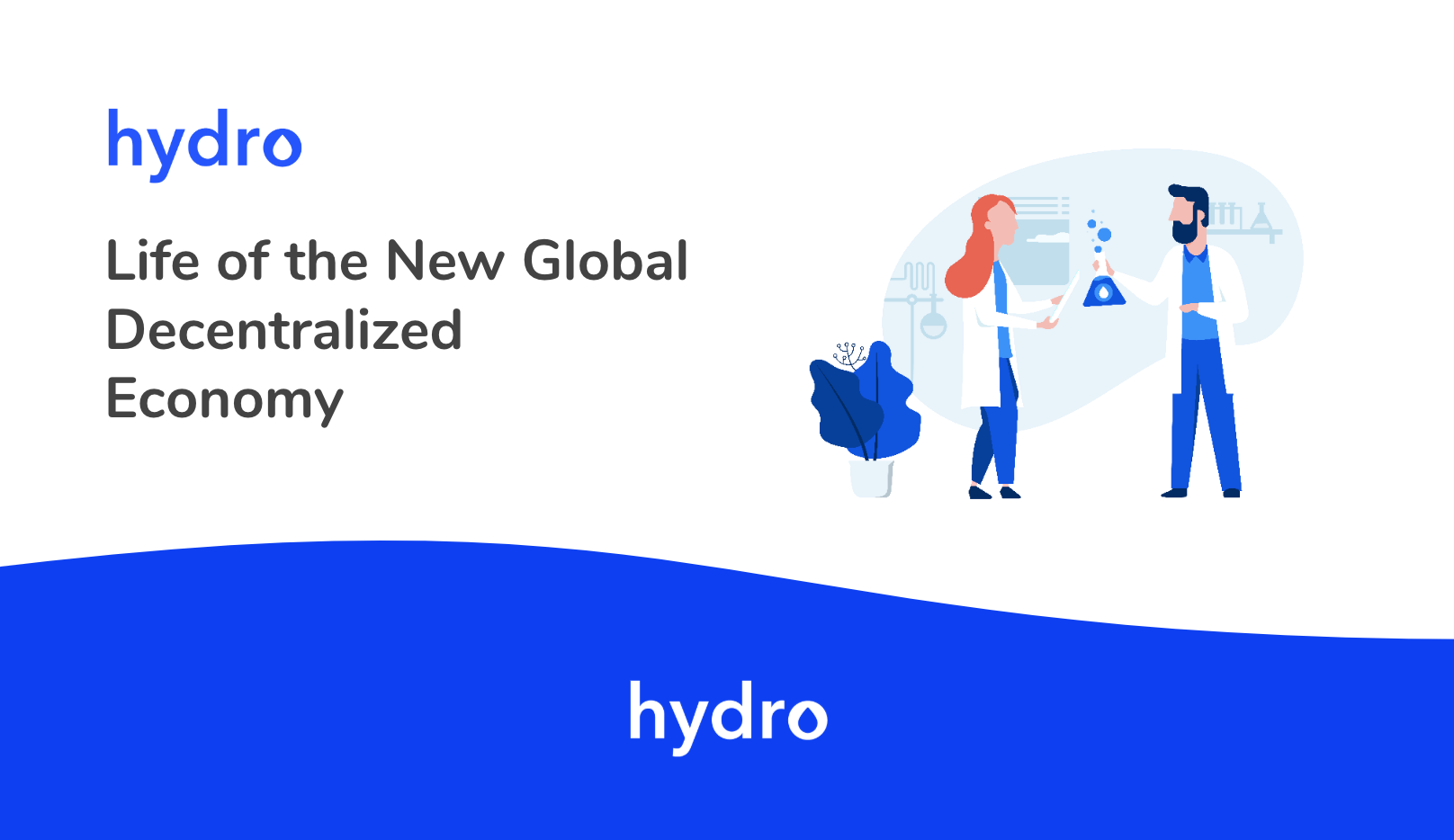 I currently work with Hydro Labs, which is a company building various smart contracts/protocols, and products on the protocols with which we have developed, where we are focused on simplifying blockchain so it can be mass adopted quickly and easily.

Hydro was initially created by a Fintech company called The Hydrogen Technology Corporation, located in NYC, which has a significant number of enterprise and MNE (multinational enterprise) partnerships. It was following the Equifax hack in 2017 that they realized the need for a decentralized blockchain SaaS solution within the Fintech industry. This breach emphasized how privacy and security is of utmost importance and sowed the seed for the company to build an entire decentralized economy for identity-driven applications. The team quickly began development on the project, releasing ‘Raindrop’ (our authentication protocol), and soon after ‘Snowflake,’ our digital identity (DID) management protocol. Along with that, ERC-1484 EIP (Ethereum Improvement Proposal) was shared with the Ethereum community and became a new digital identity standard! All of the things that are built within our ecosystem are tied back to this extremely powerful non-fungible, non-tradeable, identity token.

Hydro is now a community-driven, open-source, project with the goal of bringing blockchain solutions to the masses. 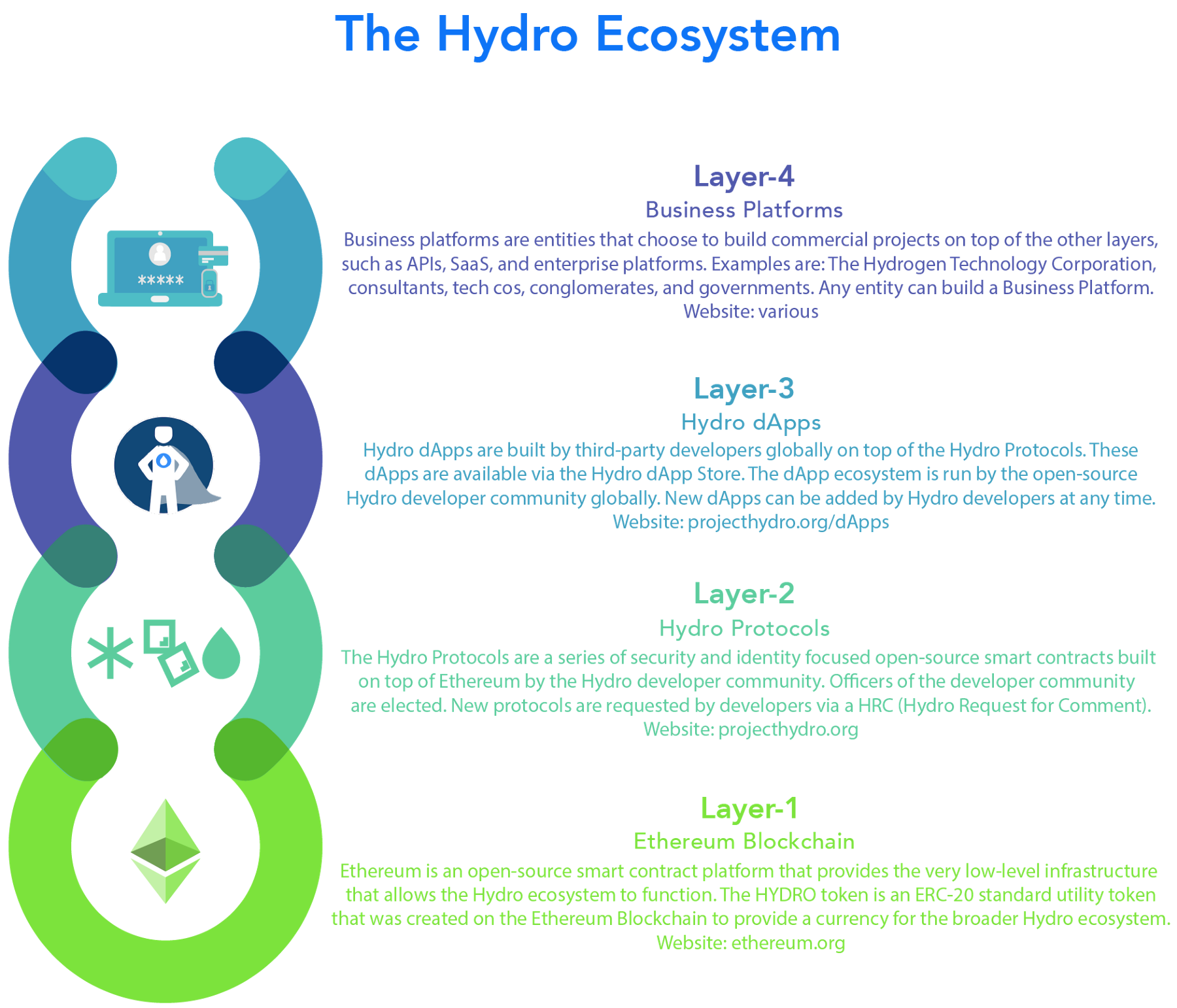 What went into building Hydro?

Building out the tech and an organization committed to the long-term sustainability of the project involved many challenges, including representing the massive community of Hydro fans and contributors, and creating an organization structured so that the broader community could take part in shaping the future of Hydro; all while continuing to push forward the development of the Hydro protocols, libraries, apps, and dApps. I would say that the hardest part in the past year was creating our ByLaws and designing a structure built for longevity, unlike many blockchain companies and projects which fizzle out and die off within a year.

This past month we did a soft launch of Hydro Pay, the first permissionless, gasless P2P payments app, built on Ethereum. Let’s take a look at the soft launch! We generated over 4,000 unique HydroID’s, which all were stamped on-chain individually- recording a person’s digital identity, and a large majority of those users made 2-3 transactions in HYDRO after downloading the app. On the development side of things, the logic of the app wasn’t able to handle the massive load of users minting their digital identity (good problem to have), and the way we were interfacing with Ethereum on the backend wasn’t efficient enough to handle the high volume. We had some transactions stall while creating Hydro IDs, which is what we call the EIN (Ethereum Identification Number) in our ecosystem, and some users were left stuck on a page trying to generate an ID. This obviously was something we weren’t ready for and had not been able to test in the beta, as we had about 1,000 people download and use the app within 30-60 minutes. Since this type of load hadn’t been experienced previously by an organization utilizing meta-transactions (this product was one of the first to utilize it on the main-chain), it was something we had to fix quickly. As of about a month ago, we were able to launch a beta update that has been entirely bug-free!

Hydro was not your average crypto project from its inception. Unlike most of the projects we saw in 2017/18, Hydro did not conduct an ICO and did not raise millions of dollars in BTC or ETH. Instead, Hydro was created and funded by Hydrogen as part of their wider business. Later, as the open-source project split from Hydrogen, Hydro Labs has continued to develop and market the project entirely with HYDRO tokens. The team and all of our developers are paid in a pool of tokens set aside for development and we all have a vested interest in the long-term success of the project.

Since the project is open source, all of the protocols are freely available for anyone to use. We have recently built a mobile app, Hydro Pay, which again is 100% free to download and use. The users are not charged for gas, instead opting for the meta-transaction route to simplify transactions for the end-user. This doesn’t mean that we are never going to make money, as we are focused on sustainable products with revenue that allow us to keep building! Of course, it’s not the easiest of routes to take in business, starting with nothing, but we have shown that we can build things that most multimillion-dollar funded projects could never build. At the end of the day, we firmly believe that our growing community, strong relationships, and exciting protocols and products will allow us to revolutionize industries.

The crypto space is a strange beast when it comes to projects and competition. It’s a lot like football in that it is very tribal. Projects don’t like each other, project fans don’t like each other, and many projects seem to want to build these gated communities where they are king. We are not like that. We want to work with other projects to make blockchain work, and we are grateful to have found some fantastic teams to work with. I am always amazed by the opportunity for productive synergy in the Fintech and crypto space.

That being said, we have so many different protocols that it is difficult to tie down any one competitor, but in terms of our ecosystem, our main competition would be Hyperledger, r3, and Corda, which are permissioned private blockchain platforms. The difference with us is that we offer solutions that can be built on a permissionless public blockchain, and are completely free for people to start developing on!

I think that anyone who has been reading the news recently regarding blockchain has heard at least something about what Libra is building, and it’s doing a few different things for the space, both positive and negative. The hearings about Libra have given blockchain a massive amount of exposure to not only governments, helping to educate them about the tech, but also to almost every country around the globe learning more about this “revolution.” On the bad side, what Facebook is building is utterly terrifying for anyone who respects their privacy. Where we are currently headed most likely includes more regulations within the space, most specifically in regards to cryptocurrency, not blockchain, since they should be viewed as entirely different things.

We have a ton of product releases lined up currently, and we are extremely excited about them!

Obviously, achieving a product lineup like these, are nothing short of difficult, and none of it would be possible without our community of developers! We’re very lucky to have people from all over the globe helping out with what we’re building. We just recently released the Hydro Pay app with all of the v2 functionalities integrated, and are currently working out different types of fiat on and off-ramps within the app! The Hydro X app was finished late last month, and we are doing a bunch of internal testing on the product, which is going well! We also just announced recently that the remittance product will be built directly into the Hydro Pay app, so it will be an all-encompassing payment solution for anyone around the globe.

The future of DeFi is massive market growth, and we hope to be the forefront of platforms building innovative solutions. In terms of emerging markets, Decentralized Finance is a massive benefit for people to become a part of a larger global economy. This entire idea of financial freedom allows individuals to break away from their local organizations who are charging massive amounts of fees for their SaaS or products. With cryptocurrency and blockchain, it’s amazing to think that someone can receive payment for little to nothing even if they’re thousands of miles away!

Feel free to reach out to us if you’re interested in building a solution on our platform, or even looking to join our team! We’re hiring! da@projecthydro.org

We talk with Leonard about zero-knowledge proofs oracle, 'Snarks as a Service', and where is room for competition in the crowded DeFi oracles market

Caleb on challenges of communicating and distilling information about Uniswap liquidity pools, and Ethereum business models