Bancor’s head of growth Nate about AMMs, Bancor Protocol backstory and what is new in Bancor v2.

My name is Nate Hindman and I’m head of growth at Bancor Protocol. I studied economics and started my career as a journalist in the U.S. covering new financial technologies. Afterwards, I decided to learn some programming and launched and worked in a couple mobile Internet startups.

In 2017 I discovered Ethereum and started researching decentralized exchanges and trading tokens. One of the DEXs I used to trade was Bancor and after poking around the exchange I noticed a peculiar feature: there were no order books. Instead a set of smart contract-based automated market-makers (AMMs) was used to perform the exchange’s core operations, like listing, order-matching and the circulation of trading fees.

I started reading about AMM liquidity pools (Bancor called them “relays” or “smart tokens” at the time) and learning about how they could be programmed. I reached out to the Bancor team and started working on the project full-time in late 2017.

A bit about Bancor: Bancor is a protocol that allows users to customize and deploy automated market-maker liquidity pools, provide liquidity and swap tokens. Providing liquidity to Bancor is permissionless (no central party can block or control the process) and easy for everyday users (add/withdraw liquidity in a couple clicks). In Bancor v2, liquidity pools can be deployed with dynamic parameters to allow for single-token exposure for LPs, impermanent loss mitigation and low-slippage swaps.

Having launched some of the first AMMs on the blockchain in 2017, the team has learned a lot about the primitive over the past 3 years and to watch the AMM explosion in DeFi has been nothing short of incredible. The past year in particular has made me more confident than ever that this new form of asset exchange and liquidity provision can have a transformative impact on both crypto and the broader financial system.

The original motivation of Bancor was to provide an alternative to the order-book based model of decentralized exchange and allow tokens to achieve instant, on-chain liquidity through the use of algorithmically-managed token reserves in smart contracts.

We quickly found a product/market fit with new token projects that were growing fast but didn’t necessarily want to spend the time or money listing on an exchange and pay market-makers to create liquidity.

A healthy AMM liquidity pool is beneficial to the users of a token-based network because it provides a liquid on/off-ramp through which users can access the network. It also offers token holders a new way to generate yield on their tokens in the form of automated market-making fees and liquidity provider rewards (“liquidity mining”).

In the past two years, we’ve seen liquidity provision to AMMs basically explode. AMMs are now “liquidity of first resort” for new DeFi token projects and increasingly competing on volume and prices with centralized exchanges.

DEX aggregators magnify the “liquidity blackhole” effect of AMM pools through smart order-routing. Whichever pool is offering the best price at a given moment is chosen to fill the trade and wins the trading fee. DEX traders are increasingly exchange-agnostic, relying on these aggregators to find in real-time the best liquidity source for a given trade. Trading volume naturally flows to pools that offer the best prices and the highest yield to liquidity providers.

After years of DEXs capturing only a small percentage of total crypto trading volume, AMM-based DEXs like Bancor have started to generate a significantly larger share of total crypto volume, and in the process, are allowing for a new form of community-sourced liquidity to emerge where everyday users can act as market-makers and not just the pros.

What went into building the Bancor Protocol?

A lot of trial and error. When Bancor introduced the first AMMs on Ethereum in 2017, the notion of an on-chain, order-book-less exchange was very experimental. Bancor was designed to solve the liquidity problem where sparse order books struggled to guarantee liquidity to traders on both sides of the trade. Just a few years later, Bancor v1 has spurred an ecosystem of innovative AMMs which have generated billions in volume. But the success of the first generation of AMMs has exposed several downsides of the “classic” AMM model, affecting both traders and liquidity providers:‌

With the interests of both traders and LPs in mind, we started building Bancor v2 to design solutions to these problems. In order to address these issues, we built an AMM solution that offers: 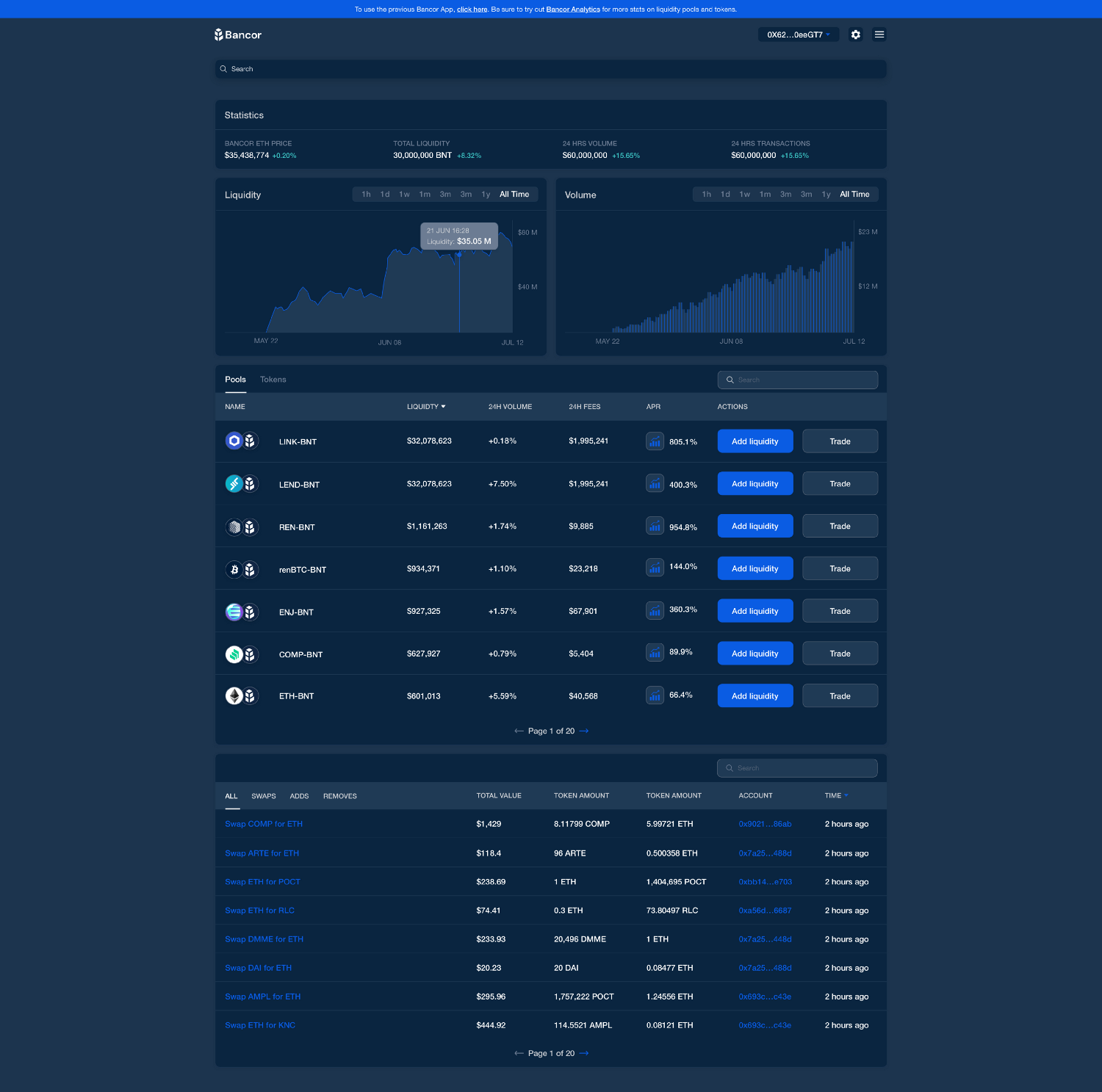 The Bancor Protocol generates fees that accrue in value of BNT (the Bancor Network Token) and any token BNT is paired with. While any ERC20<>ERC20 pairing can be created on Bancor with any number of assets, BNT exists as the most common intermediary token used to perform swaps on the network.

In the early days of Bancor, critics argued having a non-ETH protocol token creates needless friction, since ETH is a stronger reserve asset than BNT. However, liquidity providers to AMMs have over time begun to realize that taking on involuntary token exposure to any asset (whether it’s ETH or BNT) is not ideal.

More recently the industry has started to recognize the value of using a reserve asset (i.e., a “protocol token”) in a network of liquidity pools. BNT facilitates value accrual for Bancor’s staked liquidity and creates unique network effects: As the price of BNT rises, every pool on the network becomes more liquid.

BNT also serves as a native governance token that allows for greater decentralization of the protocol as protocol upgrades will soon be placed under the control of BNT holders who vote using the BancorDAO. The DAO’s first vote will be on the issuance of BNT to fund BNT staking rewards (i.e., BNT “liquidity mining”). All of these mechanisms would be less efficient or not possible to coordinate with ETH.

Bancor v2 differentiates from other DEXs and AMM protocols like Uniswap and Balancer in that it can be used to program AMM pools with dynamic parameters that unlock novel features - e.g., single-token exposure, high capital efficiency and impermanent loss mitigation - that reduce friction, cost and risk for traders and liquidity providers. 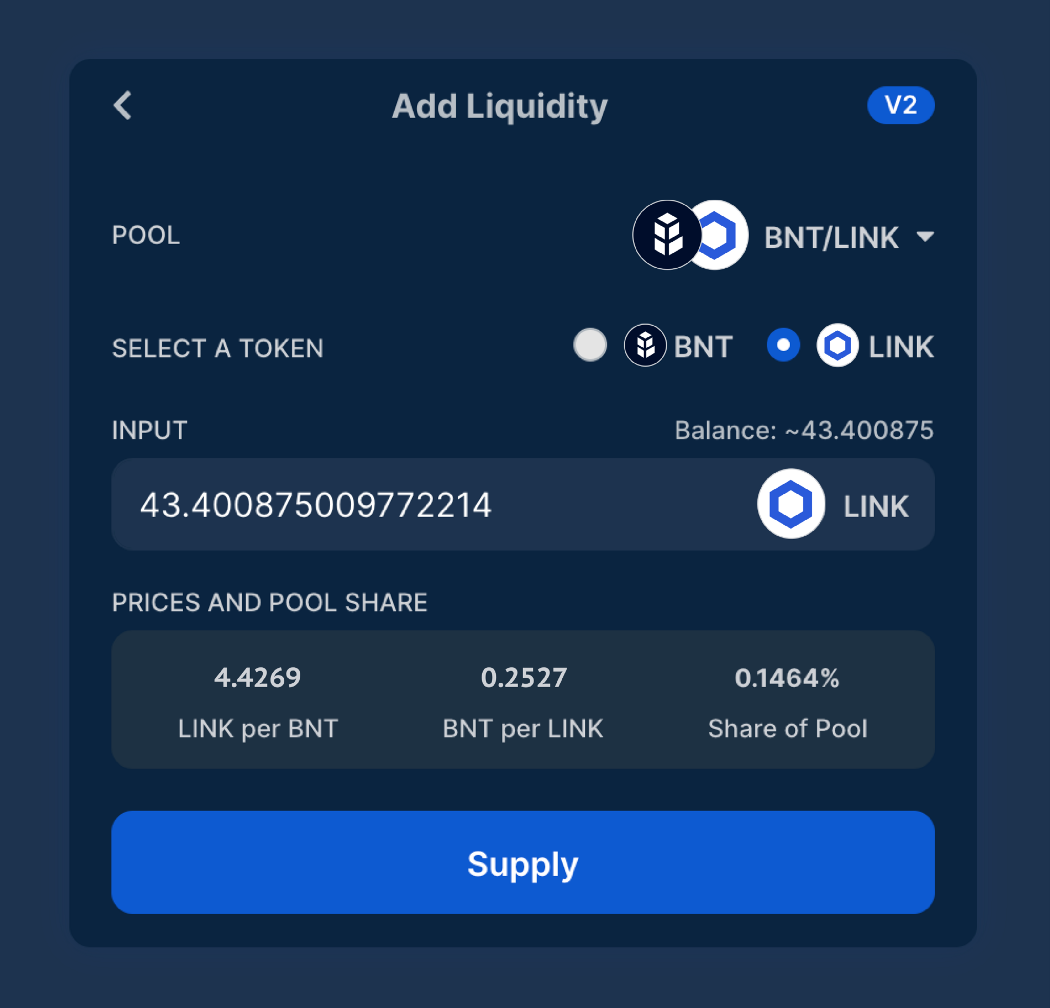 Bancor v2 is still in its beta release phase. The first live pools (LINK and REN) were successfully deployed with liquidity caps on their reserves ($1 million max). Even with capped liquidity, these pools are consistently offering the lowest slippage and best prices for LINK and REN in the DEX market. Combined together the LINK and REN pools are now processing $1-3M in trade volume per day. Unlike existing AMMs, almost 100% of the fees generated by these pools can be collected by liquidity providers, rather than a large portion of the fees being eaten up by impermanent loss.

In the coming weeks, more v2 pools will be deployed on Bancor. V2 supports any token with a Chainlink oracle, so we expect that soon dozens of token communities and projects will start providing liquidity to a pool on Bancor while maintaining 100% exposure to their holdings. We’ve already announced launch pools being deployed for LEND, renBTC, ENJ, KNC, SNX & more!

At the same time, new features are being added to the swap.bancor.network front-end in the coming weeks for liquidity providers to easily discover and track the best-performing pools on the network.

Once v2 is fully released, we have an aggressive roadmap to launch the BancorDAO and release BNT Liquidity Mining. We’re also integrating tools that let token projects deploy liquidity mining programs of their own on both v1 and v2 pools.

The pace of innovation in DeFi is astonishing and so too is the user adoption of these new financial products.

“DeFi” definitely gets thrown around as a buzzword but there is no doubt that on-chain financial products have become an epicenter for innovation and usage right now. This is attracting large numbers of talented developers, researchers, and dedicated users who have a tolerance for risk and a passion for experimentation.

The biggest change I’ve probably noticed recently is the institutional capital flooding into DeFi. The simultaneous rise of “governance tokens” has led to many institutional investors offering not only capital but becoming activists in DAOs and ecosystem participants (i.e. liquidity providers that generate yield).

I think a question that is on a lot of peoples’ minds is how do we avoid DeFi protocol ownership getting consolidated in the hands of a few institutions, while also embracing the value and credibility that institutions can bring to the space. Balancing these two things is going to become increasingly crucial for developers. I think those blockchain networks that figure out ways to favor the interests of the greatest number of users over those with the most capital will naturally win out. In DeFi, there is a strong desire for people-led growth over establishment-led growth.

The Defiprime Post #75: Your Weekly DeFi News in Bite-Sized Fashion

Simon told us Liquality backstory, and shared his thoughts on complexities of a cross-chain swap for end users