My name is Stani Kulechov, and I’m the founder and CEO of Aave. My background is in law, but I’ve always been interested in finance, and I got into crypto in college mainly through the Ethereum community. I did some coding as a teenager, but other than that, I was doing mostly law-related work. I have always been interested in finance, and when you look at the traditional financial system, there are many inefficiencies. I had all these ideas about what people could do with finance, but the traditional financial system just doesn’t allow a lot of financial autonomy. It didn’t make sense to me, so I started working on ways to improve these inefficiencies and make the financial system more effective.

If you can remove the need for trust in finances, the financial system becomes much faster, and that’s what smart contracts allow you to do. After playing around with financial instruments for a while, we started ETHLend, the first decentralized lending pool. Now, the DeFi space is worth roughly 700 million USD, and we’ve launched Aave Protocol. We’ve definitely come a long way. 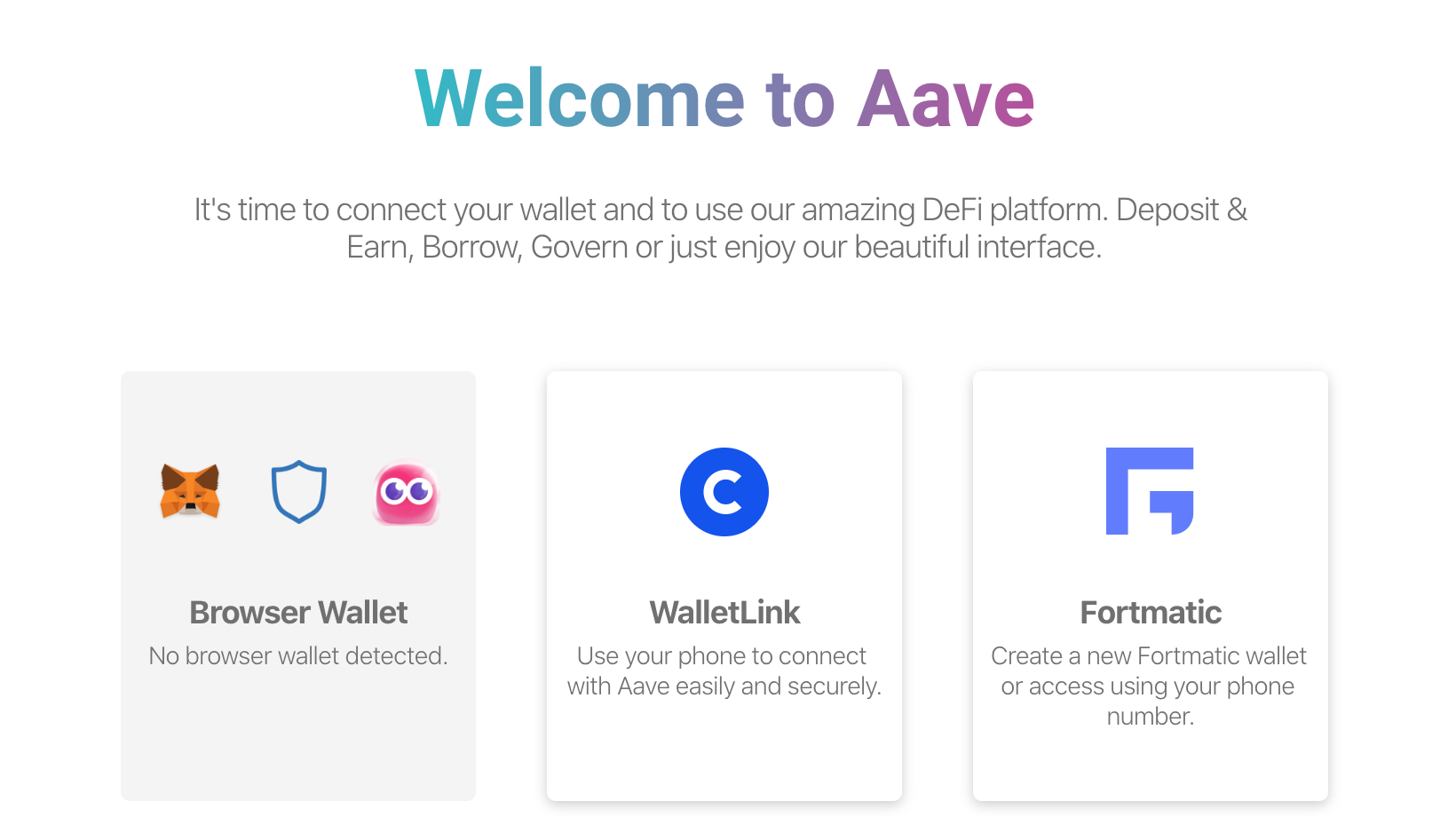 We did our ICO in 2017, following the trend in San Francisco and London. ETHLend is considered one of the OG’s of the DeFi space, but since then there’s been many cool projects out there building on and improving what we did. We saw what others were doing and what was missing, and then we built the tools to make it better. For example, Aave flash loans let developers borrow instantly without needing to put up any collateral. This is a huge opportunity for arbitrage, and it has many other use-cases too. People can get creative with what we’ve built, and we’re excited to see all the applications.

We aren’t a huge team– we are about 20 people. We are headquartered in London, and we have another office in Switzerland. Half the team are developers, and the other half do more support, research, outreach, etc. It’s an awesome team to work with– everyone is confident in what we’re doing, and we have grown a lot as a team.

What went into building Aave?

We released the latest version of ETHLend last year in March, and then we started building Aave Protocol, since we understood how pooled models could work to arrange liquidity. We saw that people weren’t earning anything in their bank accounts. Money should never sleep– we have to bring those people to DeFi and show them that there’s loads of cool ways to control your money and make it work for you. People value transparency and being able to make the most of their money.

It was very tiring, and lots of work went into it, but I think this is better than anything else. Our team of developers are all super talented and dedicated– everyone on the Aave team really put in work. We have cool new features like flashloans and aTokens, which let you do stuff that you couldn’t do before with DeFi.

We take security very seriously, and we audited our protocol throughout the whole development process to avoid any severe flaws in the codebase. OpenZeppelin just released their audit of Aave Protocol, and we also have an ongoing bug bounty program to make sure the security remains top-notch. We publish a bi-weekly security report to keep everyone in the community updated too.

In terms of onboarding, the dedicated DeFi community already exists, and some of Aave Protocol’s tools, like flashloans, are incredibly useful for developers. However, one major hurdle to DeFi is education, and it is important to make it easy for people with no previous experience to understand. Tutorials, such as the one by Chris Blec, are extremely useful, but more education is definitely needed in order to take DeFi into the mainstream. Aave Protocol gives people new opportunities to do cool things with their money, but people are scared by anything ‘blockchain’, and the only way to combat this is to make it accessible and easy to understand for everyone.

Right now, we have fees. There’s the origination fee and then fees on the flash loans. Aave provides a money lending market similar to Compound. The major difference is that Aave re-uses locked assets within the Ethereum ecosystem, instead of just focusing on the total locked amount of assets. To get people into DeFi, you have to have more offerings– you can’t just do the same thing as everyone else. We decided to come up with different tools that utilize the assets in a better way, and that’s how we came up with flash loans.

Flash loans bring endless liquidity to DeFi instead of keeping the assets locked. They enable developers to borrow undercollateralized loans from the protocol, as long as the liquidity is returned to the pool within a single transaction (one block). These have many use cases such as arbitrage, liquidity, and refinancing. Flash loans it’s the first uncollateralized loan option in DeFi, and we think this will make a huge difference in the usability of Aave Protocol. Eventually, we hope that this tool will help developers build financial products without needing actual capital, lowering the barrier to entry, and letting more people build and create.

Additionally, we introduce Aave Interest Bearing tokens aka. “aTokens”, which are pegged 1:1 to the underlying deposited asset and accrue interest in real-time directly in your wallet. When someone deposits an asset, a smart contract mints an equivalent amount of aTokens, which are then distributed to and held by the lender, if you deposit 100 Dai, you will get 100 aDai. These aTokens can be freely stored, transferred, and traded. While the underlying asset is loaned out to borrowers, aTokens earn interest directly in whatever wallet you’re using (Metamask, Coinbase, etc.)! You can redirect the interest earned on aTokens at any time to any Ethereum public address, which gives you tons of control over where your money goes.

Also, Aave Protocol lets users switch between stable and variable rates, which is great for keeping the market on your side. We can’t just offer variable rates, because these are too temperamental and can fluctuate depending on liquidity in the pool, which is terrible for the end-user. Stable rates give users certainty on their interest rates, taking away the stress of taking out a loan. You can always switch– if you originally had a variable rate and the rate starts going up, you can switch to the stable rate and vice versa.

This is a funny one because there is no regulatory landscape. No single jurisdiction has commented on DeFi yet. Currently, DeFi operators have to deal with old school regulations that do not often fit, so a case-by-case analysis is needed. In general, any regulation is welcome in the DeFi space. This will help remove the grey area.

The immediate next steps for Aave are to keep monitoring the security of Aave Protocol with continued audits and an ongoing bug bounty program. As the total liquidity in Aave Protocol increases, we need to take heightened caution on security measures. Currently, Aave is keeping the ownership of the protocol to audit and respond to any issues that may arise. However, once all of the kinks and bugs are worked out, the next step will be for Aave to transfer the ownership of the protocol into the hands of the community. To do this, we have to add governance to smart contracts. Once the governance is released, Aave’s native LEND tokens will be used to propose and vote on changes in the protocol; that way LEND holders will have a say in the governance. We want to make sure people who have assets in Aave and who are the ones directly affected by Aave Protocol have a say in future decision-making.

After these next steps, the ultimate goal is to bring DeFi into the mainstream conscience, but this requires the DeFi landscape to change a bit and make it easier for people, even those who aren’t tech-savvy, to use these products. DeFi has many opportunities for mainstream depositors– why let your money sleep in a normal bank account, when you can be earning interest, etc. with DeFi! Once more people learn about DeFi and the potential for controlling their money, it will become more popular.

I think the governance discussion is super important for the future of DeFi. I’m excited about new assets that could be loaned out or used as collateral. In a world where everything is tokenized, and everything is on smart contracts, your protocol must be democratic, so it reflects the will of the people impacted by it.

Inje Yeo, Co-Founder of Set talks about a mission to make wealth management accessible to the world.

The Defiprime Post #48: Your Weekly DeFi News in Bite-Sized Fashion