What’s The Difference Between MakerDAO And Equilibrium?

Cryptocurrency at large has a volatility problem, and decentralized stablecoins like MakerDAO’s DAI and Equilibrium’s EOSDT each present their own compelling solutions to it.

It’s easy to talk about popular cryptocurrencies like BTC and EOS as “the future of money,” but until they begin to behave like the money we already use every day — stable and predictable to the point that we take it for granted — we’re going to continue riding a slow adoption curve. Major fiat currencies with boring price histories are going to continue to be a popular way to move money around the world.

But suppose someone with a large holding of EOS cryptocurrency wanted to leverage that position in pursuit of more EOS. A financial maneuver of this variety — which conventional traders in conventional markets execute daily — is impossible without a stable source of USD-pegged value to make it happen. Decentralized stablecoins are exactly the mechanism called for, and now suddenly, there are choices within that narrow (but growing) space.

While the stablecoin market occupies just a fraction of the overall cryptocurrency whole, that share has lately gained lots of momentum. What was only 1% of the market in 2017 has since grown to occupy 3% in 2018, and this year’s launch of new platforms like Equilibrium-based EOSDT seems to confirm an upward trend.

Commonly pegged to major fiat currencies like the US dollar, decentralized stablecoins are digital assets that derive their value from the over-collateralization of volatile digital assets. Overcollateralization and smart contract algorithms ensure these stablecoins’ constant value, whether the crypto market moves up or down. A person’s stablecoin holdings will have the same purchasing power today, next week, and next month — you can rather accurately contextualize these stablecoins as “a dollar on the blockchain.”

This article will compare and contrast two such decentralized stablecoins, DAI and EOSDT, and the frameworks that drive them, respectively, known as MakerDAO and Equilibrium. Launched in 2015, MakerDAO is a significant and established player within this nascent fold of cryptocurrency specialty.

Launched much more recently in April of this year, Equilibrium is one of its newest entrants, and in fact, has recently changed the parameters that drive its overall system. Here’s how two different tools line up for solving the same underlying problem.

What Equilibrium and MakerDAO have in common

Both of these platforms generate decentralized stablecoins. But where that conversation ends for MakerDAO, it only just begins for Equilibrium.

Equilibrium is a multi-chain decentralized finance framework that serves as a foundation for developing new applications. The EOSDT stablecoin is its first product and proof of concept, based on the EOS blockchain. You can think of Equilibrium as the underlying technology layer that brings EOSDT stablecoins into circulation and makes them work. Still, developers can use it to create any application they can dream up that calls for liquid stablecoins out of the box. This makes Equilibrium a powerful development layer for games, online stores, and more.

MakerDAO’s functionality is rather rigidly limited to generating DAI stablecoins — you can’t develop on top of it.

While the platforms have different critical thresholds for satisfying the over-collateralization requirement, users across both platforms are free to exceed that requirement by as much as they wish, further stabilizing their position beyond the limit. A position collateralized well above and beyond the limit is only made that much more robust against market uncertainty.

It’s important that users not collateralize their assets at the exact minimum requirement. It would only take a slight market dip for users to default — with even a minor down market in a position’s first few days, it for lack of sufficient over-collateralization. Without these minimums, there’d be no mechanism for actually backing their value with real liquidity.

How Equilibrium and MakerDAO differentiate

The chief operational difference between these platforms is the collateralization requirement for each. MakerDAO users must overcollateralize their assets at 150% or more, while Equilibrium requires just 130%. This means it might be more affordable to generate an EOSDT position than a DAI position.

There’s also a substantive difference in the rates that users pay for access to this kind of crypto-finance service. Where MakerDAO takes 5.5% APR, EOSDT meets the same need for just 1%.

MakerDAO has also had issues maintaining DAI’s peg to the US dollar. In order to preserve that balance, its historic rates have been as high as 18%. Newer systems may offer more consistently lucrative payment rates. Equilibrium, for example, uses an external price feed to value its collateral, and the system continually monitors the ratio of collateral to the total EOSDT supply to make sure it always meets the minimum threshold. This kind of infrastructure makes it easier to support an accurate USD peg. 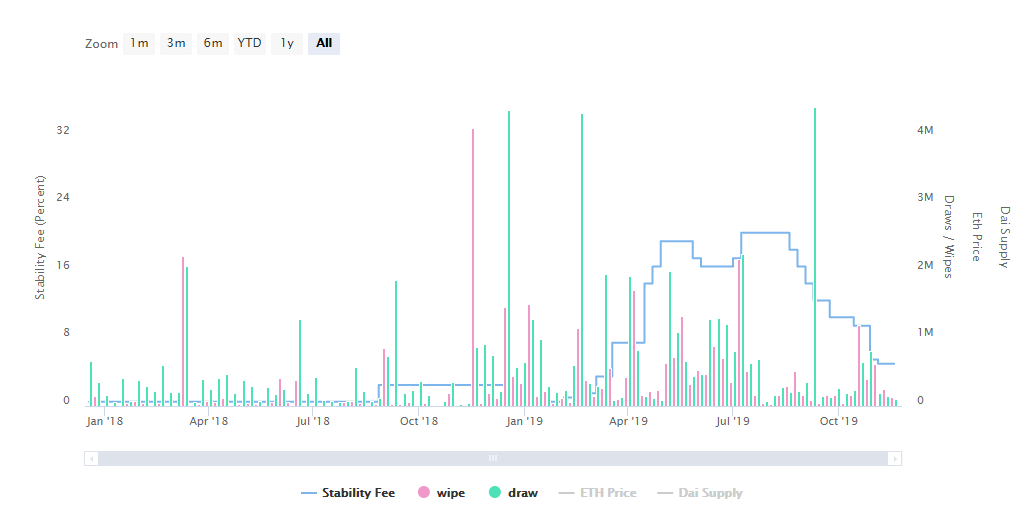 MakerDAO is built on top of Ethereum, as are a wide variety of other blockchain projects. Ethereum is a go-to choice of development platform for many because Ethereum is highly accessible and offers a lot of compatibility with existing blockchain infrastructure. That’s surely been an asset in MakerDAO’s history of overcollateralizing Ethereum cryptocurrency.

Ethereum tops out at 15 per second, which is a far cry from EOS’s 3,000 per second. Ethereum’s issues with scalability are known, and those problems with growing to serve more users are inherently MakerDAO’s problems as well. There is a hard-coded limit on computation per block that means the Ethereum blockchain (and therefore the projects that depend on) will only ever move so quickly.

EOS is not without issues of its own. The network recently fell victim to a mysterious airdrop for a token called EIDOS that sent the network into congestion mode. Users “mine” new EIDOS tokens by moving EOS around on the network. In practical terms, this means EOS users are sending executing lots and lots of microtransactions with EIDOS’s smart contracts.

When a lot of people want to do the same thing on the network, they fundamentally slow each other down.

Platforms operating in this niche need a mechanism for getting rid of collateral when it can no longer sufficiently back a corresponding position. Margin calls serve to liquidate the collateral and start covering the position. Both platforms take a penalty fee from the position when this happens. Equilibrium recently reduced its penalty from 20% to 15%, and MakerDAO takes 13%. These fees incentivize people to meet and exceed the collateralization requirement when they create their position.

These platforms also rely on an auction mechanism for selling the collateral to the community at a reduced price. This system of rapid liquidation is what helps protect a decentralized stablecoin’s value.

As mentioned, EOS is a rather speedy blockchain that can support some advanced functionality. It’s capable of handling new rates updates to the corresponding smart contract once a minute. This means Equilibrium can check market prices more often than MakerDAO does to determine the overall value of its collateral pool. It sees a higher-resolution picture of the market and is set to respond just as acutely.

Meanwhile, MakerDAO depends on external “keeper” bots to “bite” positions to liquidate them. The system isn’t perfect — bots may not even want to bite collateralized debt positions in the first place if the price drop is sharp or the Ethereum network is congested.

What the future holds

Now that you have a clearer understanding of how these two specialized decentralized finance products stack up against each other, we can call attention to the bright future in this space. The trend suggests rising healthy competition in the stablecoin market — decentralized finance products are only becoming more common as people begin to form the picture on the blockchain.

Those seeking to compete meaningfully in this space will compete in secondary markets for users and liquidity. Newer systems might offer more lucrative parameters since established players can’t provide better interest rates — the existing rates are crucial for balancing the system.

As mentioned, Equilibrium recently changed its liquidation penalty from 20% to 15% and dropped its collateralization requirements from 170% to 130%. These changes enable more accurate price feeds and more agile margin calls.

That fact that the crypto market is still evolving is one of the biggest causes of crypto volatility today. It’s going to take stable and predictable cryptocurrency to blockchain mainstream.

About the author
Alex Melikhov
CEO of Equilibrium. 15 years of entrepreneurial and fintech experience and had been a cryptocurrency enthusiast since 2013. Became more pragmatic about blockchain after co-founding his first crypto business in 2016. Ethereum & EOS smart contracts specialist. Fan of DApps. Engineer in applied mathematics.

The Defiprime Post #84: Your Weekly DeFi News in Bite-Sized Fashion

Alex talks about R&D lab building novel stablecoin exchange xSigma DEX, and how they are going to create a unified DeFi ecosystem with their own stablecoin

The Defiprime Post #57: Your Weekly DeFi News in Bite-Sized Fashion

The Defiprime Post #125: Your Weekly DeFi News in Bite-Sized Fashion