Stakin team shared their expertise as an infrastructure operator for Proof-of-stake blockchains and thoughts on defi projects.

We are Edouard, Tiago and Lionel, a team of 3 that has been involved in Fintech and blockchain for the past couple of years. Stakin is an infrastructure operator for Proof-of-stake (PoS) public blockchain, offering node infrastructure and staking-as-a-service. We want to make it easier for token holders to stake their tokens or for developers to build products using relying blockchain infrastructure.

At Stakin, the whole team is very optimistic about the future of Proof of Stake (PoS) cryptocurrencies. We believe it can improve the distribution of wealth and leads us towards a better-decentralized future while being energy-efficient and thus sustainable.

For more information on our ambitions and background, you can check: POS Bakerz becomes Stakin to grow into the leading multi-asset staking provider 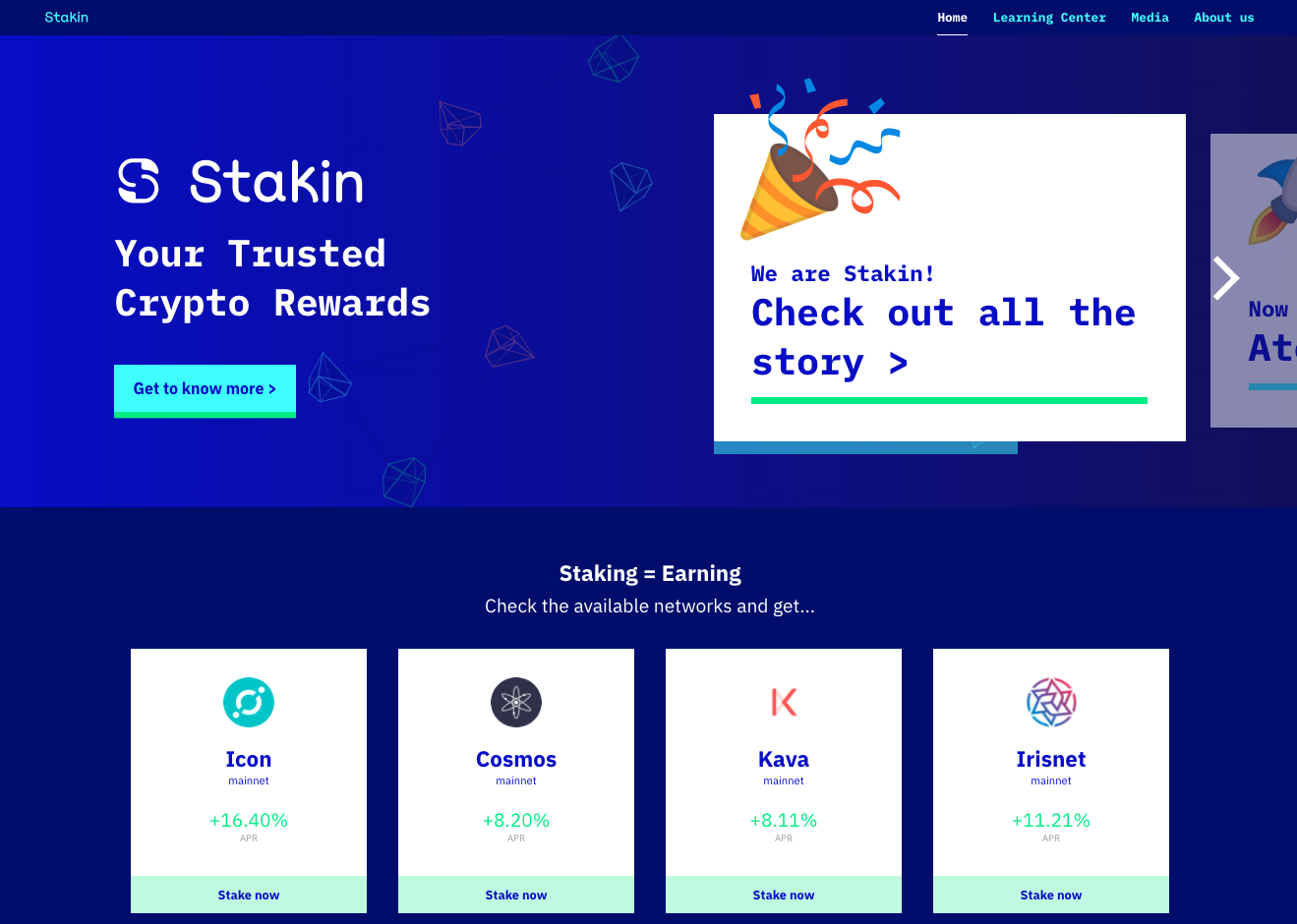 Blockchain infrastructure is hard to master, as many protocols are now shifting towards Proof-of-Stake, we believe that any token holder or developer should be able to easily benefit from a high uptime quality infrastructure for its projects, without having to manage nodes by himself.

What went into building the Stakin?

We launched our first public staking infrastructure in January 2019, which was on Tezos. Since then, we have kept expanding on new protocols and ecosystems in which we believe that they might reshape the blockchain and DeFi landscape in the future. Blockchains we operate on now include Tezos, Cosmos, Irisnet, Terra Money, Algorand, plus many in Testnet phases. 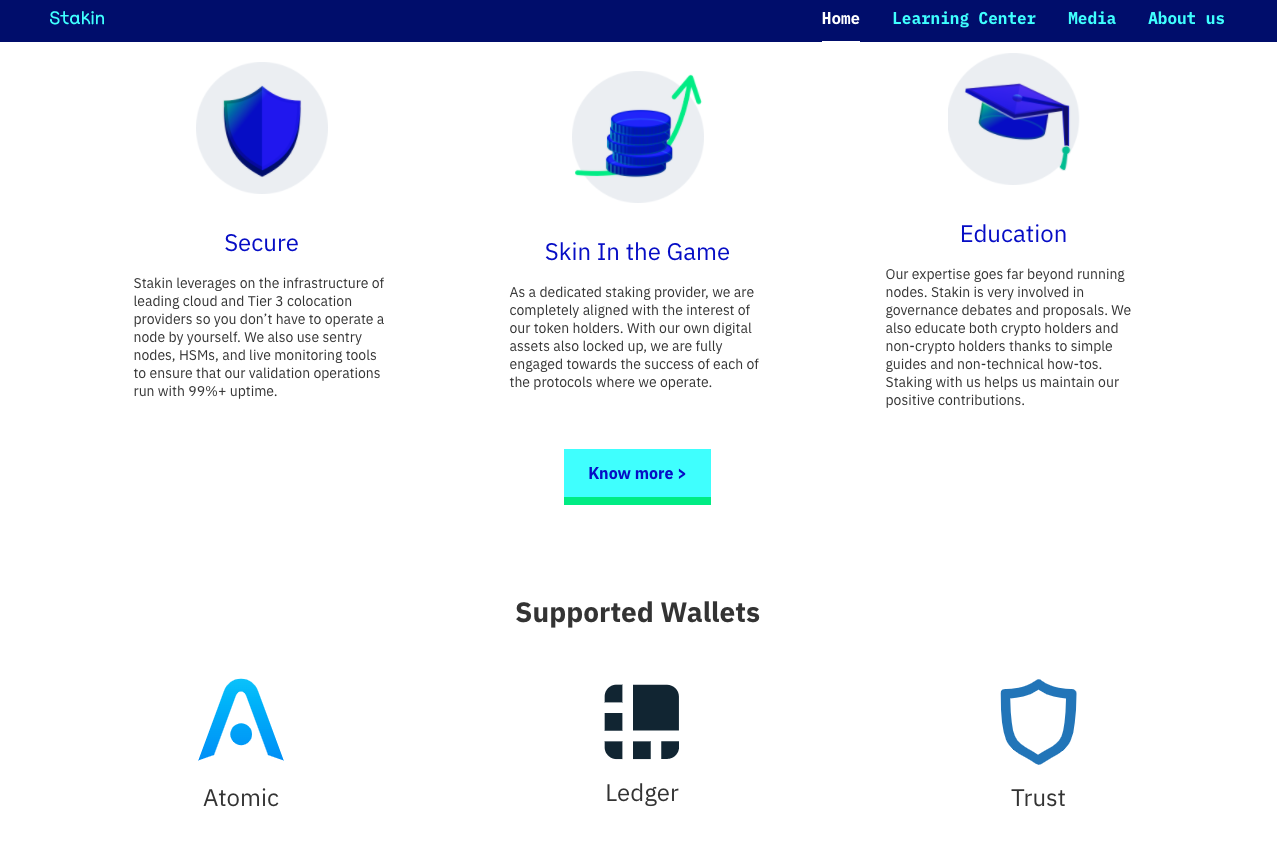 Since we started Stakin, we noticed some developments within the industry:

From our end, we keep working hard on improving our architecture, deploying on new protocols, and adding features. At the moment, we are currently exploring the opportunity to switch towards Cloud HSM, which seems like one of the best compromises in terms of security and uptime vs. physical colocation with HSM. The team is currently working on a multi-asset delegator dashboard, but we also have some nice ideas, including tax reporting tools and hedging financial products.

Our business model is very simple:

There are hundreds of staking providers out there, but we are proud to be one of the largest staking providers in Europe, with high uptime and reasonable fees. We also produce a lot of education materials in order to educate crypto and non-crypto holders about Proof-of-Stake and staking.

It is no secret that the crypto-community overall deplores the lack of advances on the regulatory front. While we understand these frustrations, we also need to be cognisant of the substantial progress made over the past two years.

Over a third of the most influential regulators have already established a clear regulatory framework. Those jurisdictions now usually distinguish between utility tokens, security tokens and payment tokens (first introduced by the Swiss FINMA at the end of 2017). The vast majority of them take a discretionary approach while some (like the US) use financial instrument tests (e.g., Howey test) to determine whether the token in question is a security or not.

The few ones that do not make any distinction between those assets typically do so either because they banned crypto-assets outright (China) or because they leave things purposely vague - but there are now thankfully only a handful of them.

While there are some clear topics on which all regulators agree (e.g., the need to impose KYC/AML checks), there is an extensive range of topics which are yet to find answers: how to deal with custodial wallets, miners, nodes, data providers…?

All this also has to be put in the context of the need for those regulators to strike the right balance between allowing innovation and preserving financial stability and protecting investors/consumers.

We are as eager as everybody else to see further much-needed developments on the regulatory front, but we equally need to be mindful that, given the complexity of the topic, those regulations can only be introduced in a gradual manner.

We plan to develop additional features for our clients, and open source tools for the community, but also to focus on helping any new validators or developers to operate a node themselves, through our node-as-a-service offering.

We believe that there is still a lot of work to be achieved on the infrastructure side in order to enable mass adoption of cryptocurrency protocols and the thriving of the DeFi landscapes.

Because of our finance background, we are also closely looking at the opportunity to repackage staking dividends into more traditional and eventually regulated financial products.

The past year has been marked by the significant developments of decentralized applications built on top of blockchains - mostly Ethereum. One of the most noticeable advances can be clearly seen on the financial products side of things. Some protocols (0x) have been pivotal in helping to develop and promote some interesting Decentralized Finance (“Defi”) applications. There is now a plethora of such projects (mostly revolving around P2P lending): Dy/Dx, Dharma, UMA, Set Protocol, MakerDAO….

They all have one thing in common: they all leverage the blockchain (=> develop smart contracts) to address certain issues encountered in traditional finance, that are essentially related trust. More specifically, using the blockchain to deal with the clearing and settlements aspects doesn’t only help cutting transaction costs aggressively, but it also helps substantially improving transaction speeds.

With all that said, we believe that there are still some limits to Defi applications and that we are still far from mass adoption. For a start, they call for on-chain transactions, which does create not only latency issues but also auxiliary risks like front running and trade collision. Secondly, it is usually hard to verify the data sources (provided by oracles) - hence creating a potential conflict of interest. Thirdly, not everything is technically conducted on-chain, e.g., the relayer’s matching engines. Finally, while one can only applaud the efforts made by the projects’ teams in terms of UI/UX, it is hard to see how the 1.7bn of unbanked people will use such “sophisticated” tools - we need to see those products repackaged/re-formatted

All in all, there has been a lot of very exciting projects which have seen the light. Once the above concerns are addressed, those projects will become democratized and see mass adoption.

Igor Barinov, the founder of POA Network, told us backstory of xDAI and shared his thoughts on blockchain interoperability, regulation, and the future of DeFi

The Defiprime Post #41: Your Weekly DeFi News in Bite-Sized Fashion

This week’s issue covers events between May 2nd and May 9th, 2021