Hey. I am Thomas Bertani, blockchain entrepreneur and consultant, founder of Provable.

I consider myself a “disruptive technologies addict” - having a background in engineering; I am an active contributor to the blockchain industry since 2012. I have worked for major Bitcoin companies and started three startups in this space. During the past seven years, I have touched several aspects of the blockchain technology, from the designing of high-performance bitcoin miners to the managing of crowdfunded projects. As a result of my contributions to the industry, in 2018, I was nominated by Forbes Italy as one of the top 5 young leaders operating in the financial sector.

In 2015 I founded the computer security company Provable Things, now part of Poseidon Group. Since then, we have achieved important goals, being internationally recognized as an essential infrastructure tool for blockchain technology. 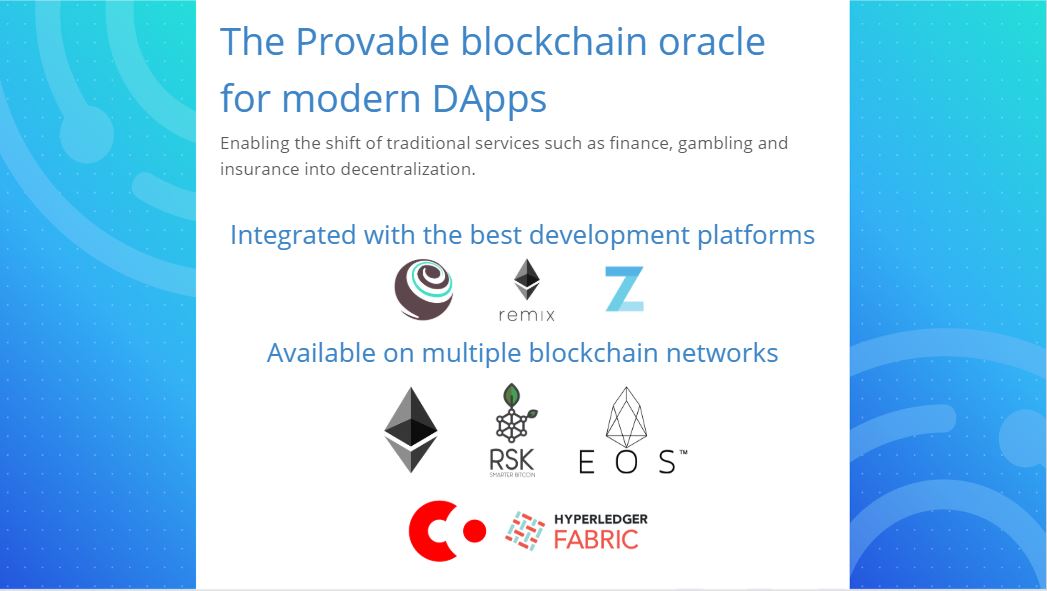 Using Provable, developers can build data-rich decentralized applications that can have a concrete impact on the real world, changing the way multiple verticals work. In the past four years; Provable has provided real-world data to blockchain applications operating in production with over a million transactions. Almost one1 thousand projects among multiple industries have integrated Provable for their needs, ranging from gaming to insurance to financial applications.

I came up with the idea of building an oracle service for blockchain applications back in 2014 while preparing the slides for an introductory talk on Bitcoin. At the time, smart contracts were just a concept as Ethereum hadn’t launched yet, but I was motivated to build something that went beyond the basic value-transfer use cases.

I started researching the topic of blockchain oracles and got in touch with other projects, that had worked on implementing such a system to understand why they had failed and what Provable could learn from that. The prototype was released on top of the Bitcoin blockchain to enable conditional payments, meaning money transfers to be released as a consequence of a real-world event.

The project started to assume the shape it has today after Ethereum Mainnet’s release. Over time, my team and I have evolved and improved the service to meet market needs - this is how we went from 10 lines of code to a reliable battle-tested system for delivering data to smart contracts. Provable combines decentralization with usability thanks to a trust-minimized approach, that enables DApps to fetch external data in a simple yet secure way.

An important element that helped develop the Provable service is the feedback we received from the community and developers leveraging our blockchain oracle. The blockchain ecosystem has advanced substantially during the past few years, unfolding new features and needs. We have been lucky enough to be part of that community since the very beginning, and so to evolve with it and learn from previous attempts.

What went into building Provable?

Our team has spent a significant amount of time on Research and Development, looking for the right balance between security and ease-of-use as well as decentralization and usability. The result of this is a trust-minimized approach combining two cutting-edge technologies that complement each other: Blockchain and Trusted Computing.

The use of sandboxing techniques (Trusted Computing) makes the transport layer connecting DApps with Web APIs secure as it is cryptographically guaranteed against tampering. In other words, while using Provable, the data returned to the smart contract is combined with cryptographic proofs showing that there’s a match between the data generated by the endpoint (such as a Web API) and the one delivered to the smart contract. The basic connection is relatively simple to build, but the most intriguing part when building an oracle service is the security behind it - this is what took the most time to be implemented and improved over time. Provable uses multiple Trusted Computing techniques to back its claims - this is what makes the oracle service unique and secure.

A challenge that we encountered when designing our blockchain oracle was to make the service secure and flexible as well as accessible for developers in order not to create a burden for startups approaching the blockchain ecosystem. At Provable, we believe that interoperability is a key component when it comes to blockchain. For this reason, we didn’t build Provable to be a self-standing apparatus but to be an infrastructure tool to be leveraged in combination with other projects.

While working on the underlying infrastructure powering Provable, we made sure to adapt to blockchain’s requirements that are specific and different for every blockchain - the service is available on multiple platforms, including Ethereum, EOS, Hyperledger Fabric, Corda and RSK. The majority of this is done internally in our infrastructure. However, we have worked hard to keep the external interface very similar for each blockchain we are integrated with to make the process seamless for other projects that are working on multiple platforms. At the same time, the system is flexible enough to make the blockchain oracle suitable for a variety of different use cases, from decentralized finance to insurance to gaming.

While the need for a blockchain oracle might not be intuitive for people entering the ecosystem, its importance is highlighted when encountering inherent technical limitations of blockchain networks. Provable is a technical tool for developers to build advanced smart contracts with the ability to fetch external data - an essential element for decentralized applications to flourish. Another exciting feature of the Provable oracle is that it is composable - in fact, it can be leveraged along with other development tools such as the Truffle framework, Remix, and the OpenZeppelin StarterKit.

As an infrastructure tool, Provable is at the basis of many different decentralized applications. While building our blockchain oracle, we have always dedicated special attention to the blockchain ecosystem as a whole. As part of our future work, we want to keep supporting the growth of the decentralized industry by making Provable even more accessible for developers and startups. We are already working with other great projects in the industry to make this possible and look forward to establishing new collaborations.

We are also dedicating an increasing amount of resources towards the field of decentralized finance. While our service is useful and powers smart contracts in all sectors, we see the financial industry as a fertile ground for blockchain technology, and we foresee DeFi applications as a booster for our service’s adoption. The financial sector has been identified as one of the verticals that might benefit the most from a more decentralized and transparent infrastructure. For this reason, we are working on new features and integrations that will help the decentralized economy particularly.

According to market analysts, two main trends have recently been boosting the blockchain ecosystem: gaming and decentralized finance. We have evolved the Provable blockchain oracle to serve smart contracts with custom-made solutions specifically designed for those use-cases. For the former; we have released the Provable RNG providing gaming DApps with a provably-fair TEE-based generation of random numbers. We are now working on a Provable-based solution for the DeFi industry, that will complement the current features of the Provable service while making financial transactions more secure (more on this will be announced during our talk at Devcon V).

Finally, we are planning on expanding the Provable blockchain oracle to other blockchain platforms as well as decentralized networks. While we have a solid solution, we want startups to decide on top of which network they prefer to build their DApps. Our team has designed the Provable blockchain oracle to be blockchain-agnostic - this makes our service flexible and capable of running on a variety of different protocols. As the number of decentralized networks grows, each of those providing ad-hoc features, we will integrate and make our service available on multiple platforms. Different use-cases may require various features - we don’t know yet which networks will end up providing the most value, so we want our service to be available everywhere to not limit the potential growth.

The traditional financial system has been shaken by blockchain technology. Bitcoin was the trigger, injecting the idea of an alternative monetary system - one that doesn’t need permission nor traditional financial intermediaries. Ten years into the game, the biggest companies in the world have turned the spotlight on cryptocurrencies and its potential to redesign the sector.

This industry has gone far beyond the concept of digital money, rethinking the entire financial system. Stablecoins are proposing themselves as a more flexible alternative to traditional assets such as FIAT currencies and gold. Decentralized lending platforms are being built to provide more transparency on borrowing and investing procedures compared to more traditional services. Decentralized solutions for derivatives are making the process for managing advanced financial instruments more transparent and automated.

This new wave of advancement in the blockchain sector is highlighting the potential such a technology can have on the future of the financial industry. A concept that I like is the one of “banking without banks.” I don’t see DeFi as a competing alternative to current financial services, but more as a way for improving the financial system. The world of cryptocurrencies will not eliminate the need for a banking system, we are not removing savings or investments or mortgages, but DeFi is rethinking those processes in a decentralized and more transparent fashion.

I anticipate the DeFi movement leading to a paradigm shift in the financial infrastructure, that will affect people as well as institutions. Blockchain technology is forcing enterprises focused on financial services to reexamine processes and functions that have remained static for decades. According to the latest Gartner report, 77% of the businesses operating in the FS sector are experimenting and adopting blockchain solutions.

Today’s adoption of DeFi applications is great if we look at it limited to the blockchain ecosystem we know. However, if we expand and consider it as a part of the whole financial sector, it’s easy to see how that is still only a small phenomenon. But one that is attracting the attention of companies big and small all around the world and whose current figures only represent the starting point of an exponential growth destined to change the financial industry as a whole.

At Provable, we are working to make all this possible, building a robust infrastructure tool that enables businesses to focus on their core service without having to worry about the underlying structure.

We have online resources for everyone who wants to know more:

or poke around with the Provable blockchain oracle:

We often attend conferences and hackathons, we’d love to meet you in person!

The Defiprime Post #126: Your Weekly DeFi News in Bite-Sized Fashion

The Defiprime Post #64: Your Weekly DeFi News in Bite-Sized Fashion