My name is Robert Lauko. I’m the CEO and founder of Liquity, an interest-free borrowing protocol running on Ethereum. Having a legal background, I got caught by the Blockchain fever when Ethereum was founded in my home town in Switzerland’s Crypto Valley. The ability to build financial applications that can act fully autonomously and without human control is fascinating!

Liquity is aimed at making collateralized borrowing more attractive and capital efficient by giving out interest-free loans at a collateral ratio of only 110%. Our protocol achieves this by issuing its own USD-pegged stablecoin LUSD, which is truly decentralized, fully backed by Ether and only controlled by the algorithm itself.

Borrowers only need to pay a small one-off borrowing fee upfront and can keep their loans open as long as they want (and maintain the minimum collateral ratio). The system is thus particularly suited to medium or long term borrowers who can amortize the interest they would pay on competing platforms. 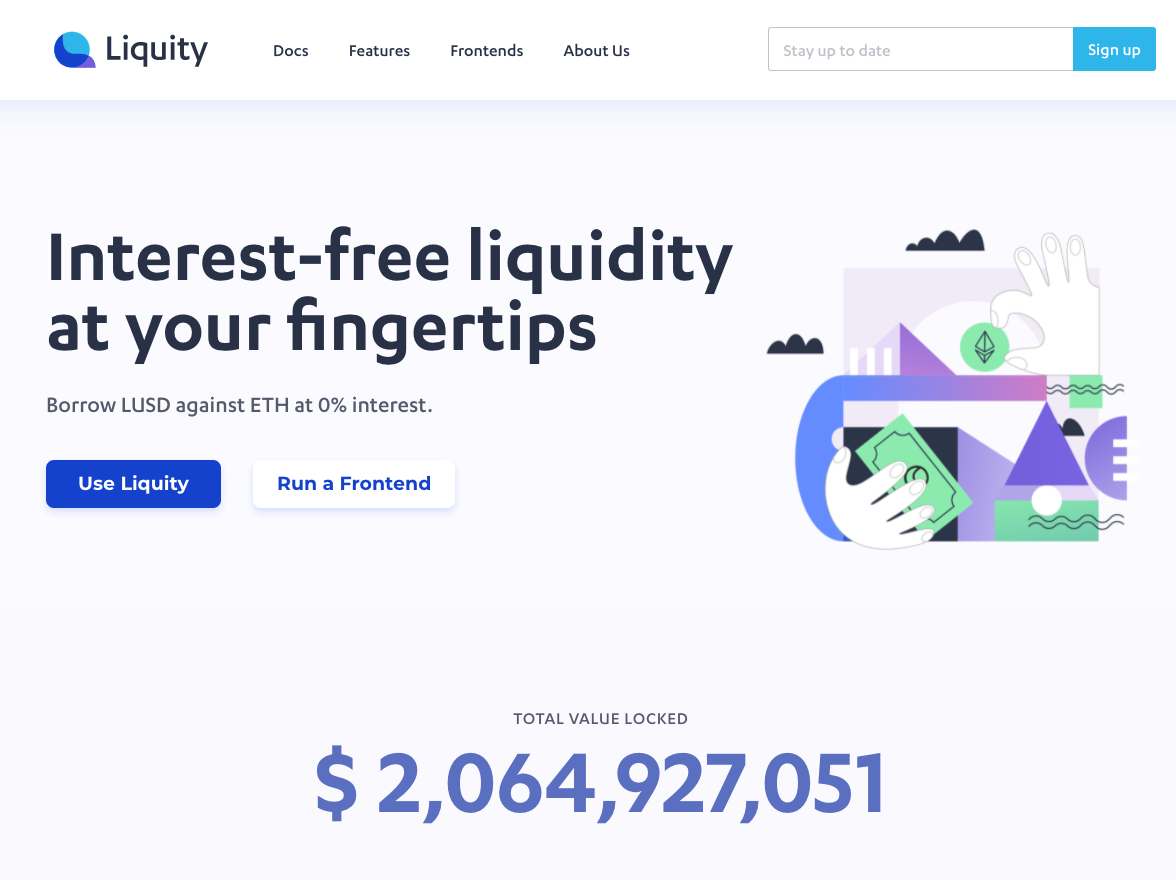 I left my legal career in early 2018 to work as a full-time Blockchain researcher at DFINITY where I explored consensus algorithms and various incentive mechanisms. That’s when I started to learn about early DeFi projects like MakerDAO, Ethlend or Compound v1. Inspired by their ingenuity, but also driven by the desire to improve existing protocols, I started to think about new and innovative ways of stablecoin lending.

I soon realized that the key to capital efficient borrowing is to make the liquidation process as fast as possible, ideally instantaneous. Rather than starting to look for buyers when a borrower falls underwater, you need to source the guarantors for bailing out defaulted positions in advance. This led me to the idea of letting the borrowers act as mutual guarantors. This was later extended by a Stability Pool, acting as the first line of defense. It offers an incentivized facility to LUSD holders to secure the loans by depositing funds that can instantly be used to repay liquidated debt positions.

To mitigate the high and varying interest rates and the instability of early stablecoins, I came up with a redemption mechanism that lets people exchange their LUSD for Ether at face value ($1). With this algorithmic monetary policy, the protocol creates a price floor at $1 (minus a fee).

What went into building Liquity?

In November 2019 I teamed up with Rick Pardoe, our core Solidity developer and now Lead Engineer.

We first had to overcome a number of technical challenges related to the low performance of Ethereum. How can a system distribute rewards in a scalable and gas-efficient way among N participants in constant time? While the problem was already solved for fixed stakes, we had to extend the existing math to cope with compounded stakes. Surprisingly, we came up with two different algorithms which approach the problem from different angles. Both solutions made it into our protocol.

Soon after we started implementing Liquity, the crypto space was shaken by the financial crisis caused by the Covid-19 outbreak. The events on Black Thursday, March 12, 2020, demonstrated the fragility of auction-based liquidation mechanisms and confirmed our endeavour to replace them with a more robust alternative.

The emergence of yield farming and liquidity mining led us to rethink our business model to remain competitive and to prepare the grounds for our Seed Round fundraise in late summer 2020.

Gauntlet networks and the monetary economist Yulin Liu helped us through modelling and simulating the system and validating the economics and mechanism design choices.

As Liquity is completely immutable, special efforts went into testing our protocol (including fuzzing and mutation testing). We wrote more than 35k lines of unit tests and completed 30 man weeks of audit performed by Trail of Bits and Coinspect.

We designed a model that redirects the fee revenue to the stakers of LQTY, the protocol’s secondary token. To boost early adoption and enhance robustness, the protocol autonomously rewards LUSD holders who provide their tokens to the Stability Pool. This is done by issuing LQTY tokens to Stability providers according to a decaying schedule which—roughly speaking—halves every year. Being governance-free, the LQTY is not used as a governance token nor as a lender of last resort like MKR in MakerDAO.

Instead of running our own front end as a team or project company, we came up with a unique incentive model for third-party frontend operators. Frontends can set a kickback rate and take a cut of the LQTY tokens that are paid out to Stability providers using their web interfaces. Frontend operators are thus incentivized to drive user demand and increase the turnover.

One of our major focus points as a team is continuing to grow the ecosystem around Liquity through integrations, LUSD adoption, and user acquisition. User acquisition is interesting for Liquity considering there are so many types of users: borrowers, Stability Pool depositors, stakers, arbitrageurs, Frontend Operators, developers, etc. To best capture all of these audiences, we’ve been careful to consider where Liquity should advertise (i.e. market) and the type of users we should engage with. For that reason, we’ve been hyper focused on growth within DeFi, using outlets like ETHGlobal, Gitcoin, Bankless, EthHub, The Defiant, and now DeFi Prime to reach our core audience.

While being in flux, the regulatory environment favors protocols that are maximally decentralized. Minimizing control over your system also reduces responsibility since you can only be held accountable for actions that you have influence over.

I firmly believe that AML laws should focus on transparency and regulate the gateways to and from crypto assets. As long as the transactions on the ledger are open and transparent, law enforcement agencies can track down the movements of crypto assets without needing to resort to middlemen with KYC obligations. The FATF draft guidance’s approach of imposing regulation on mere software developers or governance participants is misguided and may have the unwanted effect of pushing the project teams into anonymity.

Liquity has been live since April 5, 2021 and is still young at the time of writing. So, our main goal is to get it integrated in the wider DeFi space and drive adoption for loans and the LUSD stablecoin.

We’re currently exploring extensions to L2 solutions that would be more than mere duplicates of Liquity with their own independent tokens. This is not easy given that Liquity is immutable.

Furthermore, we have started researching new ideas around interest-free borrowing that would allow people take out loans in existing assets against a wide range of collateral types. The research is still in an early stage.

While DeFi applications are more and more capital efficient, there’s also a tendency leading to increased complexity through composability and integration of applications and chains.

It is yet to be seen whether the money lego approach and cross-chain solutions will prevail over simpler monolithic applications. Moreover, I expect the yields to come down as the space matures.

Projecteuanthe - DeFi through zkSNARKS on Ethereum