Igor Barinov, the founder of POA Network, told us backstory of xDAI and shared his thoughts on blockchain interoperability, regulation, and the future of DeFi.

My name is Igor Barinov, I founded POA Network, an R&D company that believes the Ethereum protocol must be cheap, fast, scalable, and secure. To support this vision, we are actively developing several projects in the space, including the BlockScout open-source explorer, the TokenBridge interoperability protocol and of course, xDai Stable Chain.

xDai Chain is the first stable blockchain. It is an EVM-based Layer 2 sidechain that uses xDai, a stablecoin, as its native currency. To make it clear: xDai is not a new stablecoin. It is original Dai bridged from Ethereum 1:1. And because xDai lives on a sidechain, transaction costs are extremely low. With xDai as the native currency, xDai is used for both transacting value and transaction fees themselves. This greatly simplifies the process compared to sending Dai on the Ethereum mainnet, where transfers require both Ether (for gas) AND Dai. But there is much more to it.

xDai’s primary use cases so far have involved peer-to-peer payments and merchant transactions. Stable transactions are key for widespread adoption; a food truck vendor needs to know that the $1000 they earn today will be worth the same $1000 tomorrow. When you combine this stability with the speed and ease-of-use offered by the xDai chain, you can create payment processes that are ready for mainstream use.

xDai was actually born out of a fun discussion during ETHBerlin in 2018. We were talking about stable coins on Ethereum, and how their popularity was really on the rise. However, the issues with volatile gas prices were undermining the whole idea of stable value transfer. As I was listening, an interesting idea struck me: What if there was a blockchain that had a stable coin as its native currency? A chain that did not have volatile gas prices because the native coin was stable. What if instead of creating and launching stable coins, we could create a stable chain.

We were talking about the four different flavors of stablecoins: fiat-backed, algorithmic, asset-backed, and commodity-backed. All of these have their merits, but what was missing was the infrastructure necessary to achieve truly stable peer-to-peer payment. To set up this infrastructure, a bridge would be required to transfer an ERC20 stable token to its own sidechain. The bridged version of the token would then become a stable native coin on its own sidechain.

I knew the idea had merit when I saw the reaction on everyone’s face when I said “Stable Chain.” Fortunately, the building blocks for xDai were already available, as POA Network had two interoperability bridges in production, the POA20 Bridge and the ERC20 <-> ERC20 Bridge. For this to work, we needed to create a new type of bridge, one that would transform Dai from the Ethereum mainnet into xDai on the xDai Stable Chain. We started on the idea immediately, and were sketching prototypes by the time ETHBerlin wrapped up!

Just recently, we had yet another great event happen on xDai: SPLUNK conference utilizing Burner Wallet. Over 10,000 attendees [in comparison, ETHDenver has around 4,000 participants] engaged in different games, activities, and P2P payments. 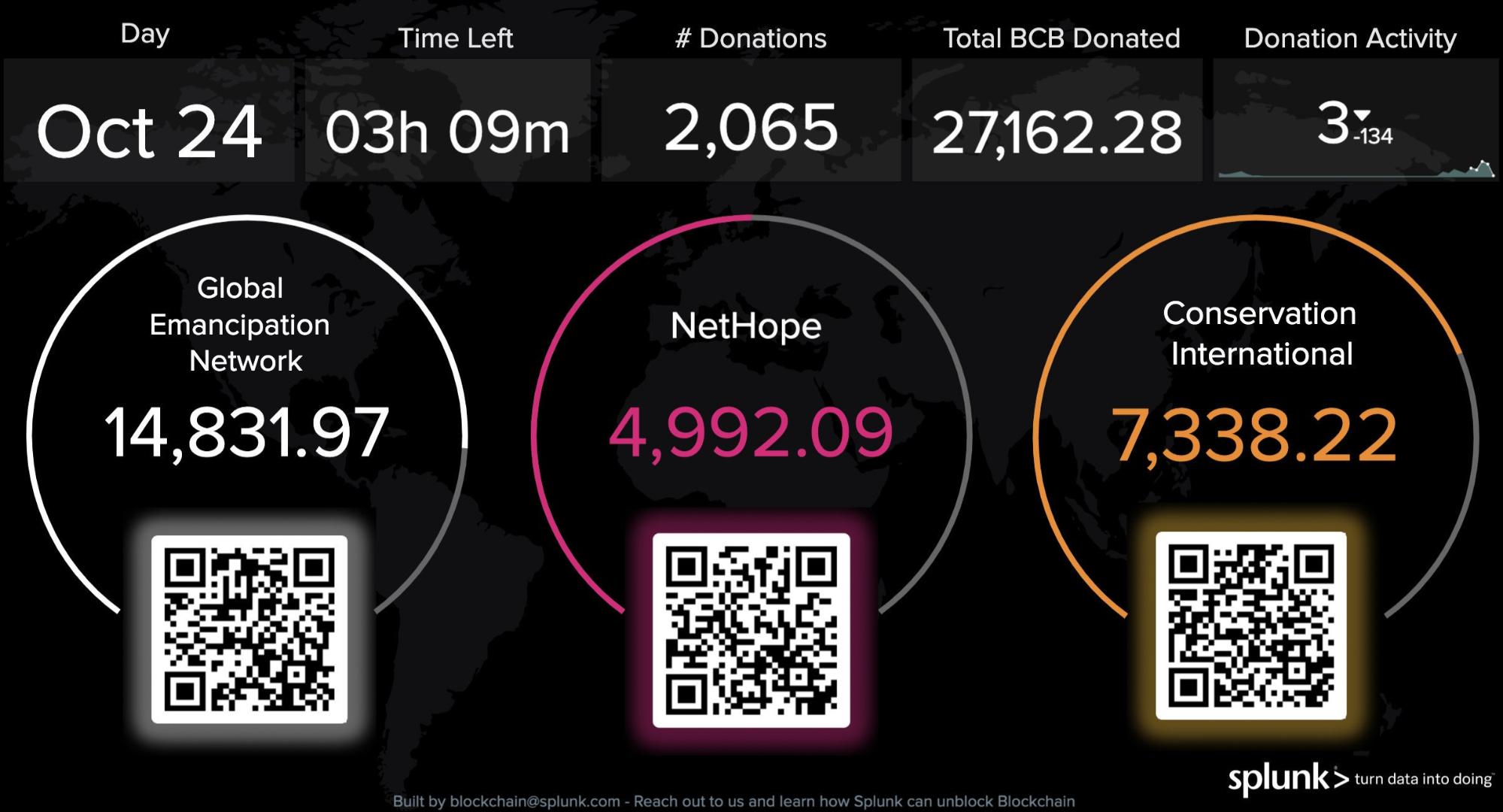 What went into building the xDai chain?

One of the things we take pride in is our approach to development and release - we are known for iterating and shipping in short cycles. After the idea for the xDai Stable Chain was established, we needed to move fast. With DevCon IV around the corner, a deadline was set to release v1 of the Stable Chain by the end of October 2018. After some back and forth, we chose Dai to be the stablecoin of choice for several reasons: Dai is algorithmically stable, there is an exciting roadmap with multi-collateral CDP (Collateralized Debt Position), and the Maker project has a friendly approach to new development. By the end of October 2018, the xDai Stable Chain was live and integrated into BlockScout, the open-source explorer. 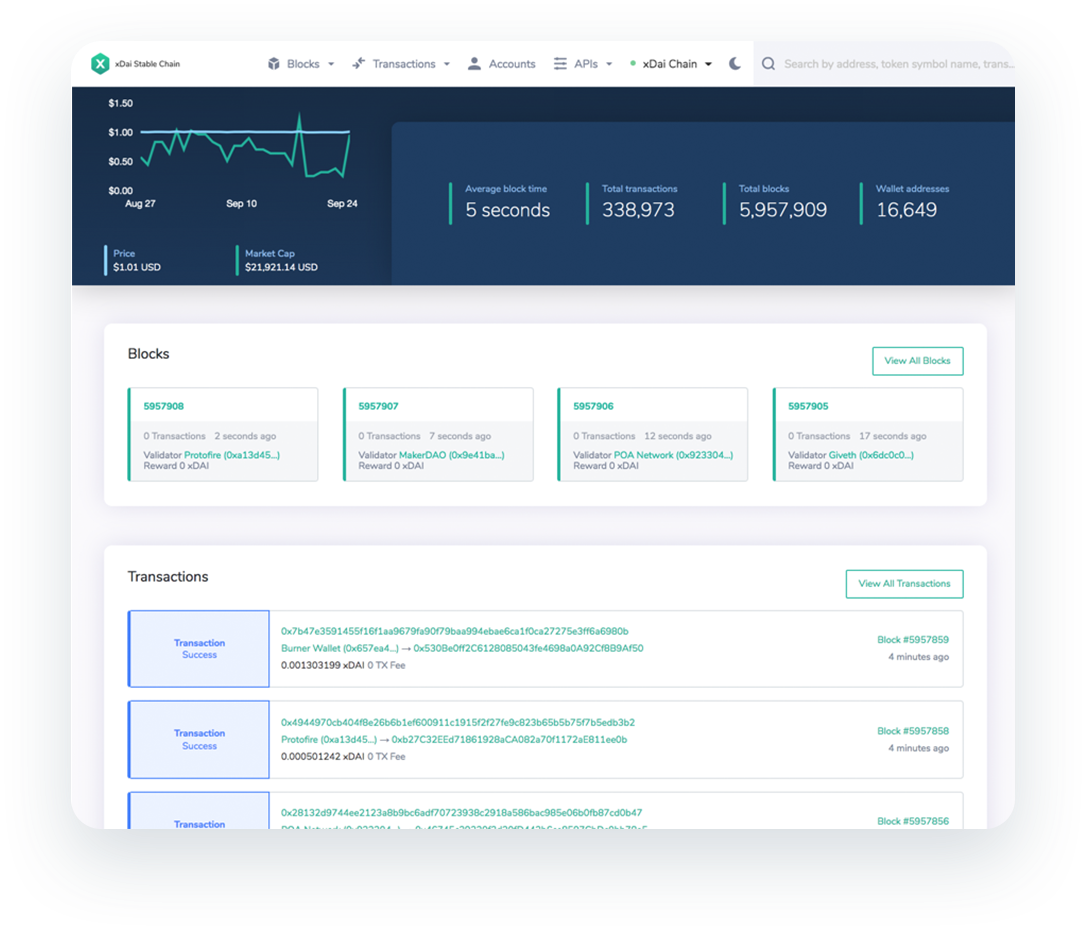 xDai Chain used several POA Network tools, including the TokenBridge interoperability protocol and POA (Proof-of-Autonomy) consensus. The result is five-second blocks and extremely low gas fees. xDai Chain and the TokenBridge are both secured by the same security protocols, utilizing the POA consensus algorithm (security audit) which has been in production since December 2017. We will be moving xDai to a new POSDAO consensus, though, but I will talk about it in detail later.

The TokenBridge protocol itself has undergone extensive auditing by companies including:

The latest release, TokenBridge 2.3.3, was recently audited by SmartDec, who found 0 critical issues. By conducting a full security audit of the TokenBridge, we aim to guard against any potential security issues. 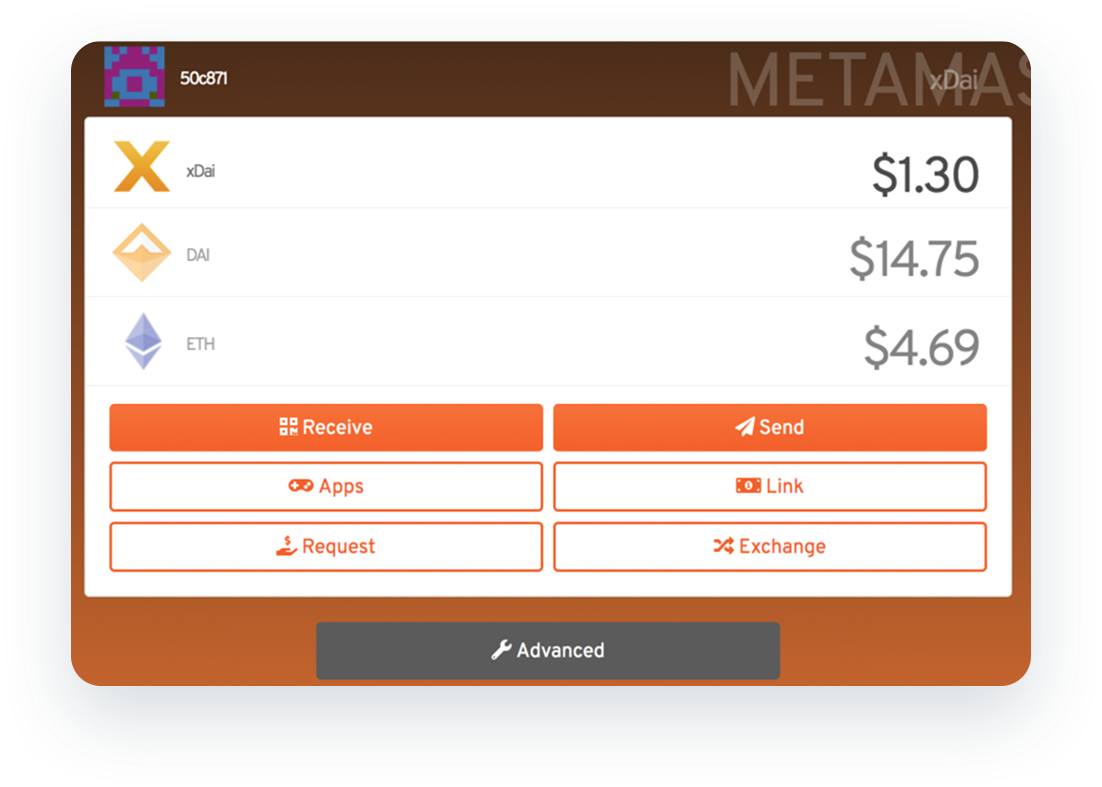 While xDai was immediately popular with the Ethereum developer community, a bit of UX magic took it to the next level when Austin Griffith released the Burner Wallet on xDai. The Burner Wallet is a web-based wallet that can be used in mobile and desktop browsers and allows the “crypto- uninitiated” to send and receive xDai with ease. It was a massive success at both ETHDenver and Ethereal NYC, where it was used as the default conference wallet. The Burner Wallet showcased the speed and low transaction costs of the xDai Chain at ETHDenver when the transaction costs for all meals was $0.20 while processing $38,432.56 in DAI to various food trucks and merchants.

Currently, validators receive transaction fees as rewards for securing the xDai Stable Chain. To provide meaningful rewards for validators and ensure the network can grow in a more decentralized manner as DeFi entails, we are moving to a new consensus model, called POSDAO. It is a unique Delegated Proof Of Stake (dPoS) based consensus, the first in Solidity and Ethereum.

With POSDAO, xDai will become non-permissioned. DPoS validator groups will change every staking epoch, which are weekly, based on staking amounts as well as a RANDAO-like implementation. A new staking token, called STAKE, will be used in POSDAO. In addition, any user with STAKE can place a stake on a potential validator node. If a node is selected as a validator, delegators who have placed a stake on this node will also earn rewards.

We’re especially proud of our unique value capture for the entire ecosystem: non-inflationary stable staking. Here is how it works: when you bridge Dai from Ethereum to xDai sidechain, that Dai is frozen in the bridge contract up until a user decides to reclaim it. While it’s in the bridge contract, it can be put into compound to generate interest. Then, anyone of xDai validators can call the contract and have that interest be distributed.

When the xDai DPOS protocol starts, a large amount of DAI would be locked in the bridge (and converted to xDai in the protocol). This locked DAI is provisioned to a lending mechanism where it accumulates interest, and this interest, in turn, provides staking rewards.

This way, we enable a new stable staking model, where we don’t wake fees from users in the form of a “network tax,” but bring more cash-flow from outside the ecosystem thanks to DeFi lending. We will be able to incorporate this mechanism with all side-chains created that utilize our TokenBridge as long as there’s a DeFi platform that will allow lending of the bridged collateral.

The more adoption happens, the more interesting it becomes. We are also experimenting with wrapping assets and moving them across chains, enabling a cross-lending environment.

We’ve seen some steps in terms of regulatory clarity in various countries, but there’s still quite a bit of uncertainty in the US and other jurisdictions. Even relatively simple issues like terminology vary significantly from jurisdiction to jurisdiction, so there’s not even consistency labeling digital assets at the moment. Just look at the recent Libra hearing and the statement by the president of China.

I believe many countries are waiting to see how the US, more specifically the SEC, construct their regulatory framework. Once that’s accomplished, a global government regulatory body will be established to hammer out the grey areas. In any case, our case is on adoption, which we believe will happen in any case - and it’s our goal as a community to make DeFi a success.

We are planning the xDai upgrade to POSDAO In Q1 of 2020. The current validators will be the initial stakers, and delegators will be able to place STAKE on any of these current validators immediately. New validator candidates will also be able to set up their own nodes and join the consensus process. Once xDai with POSDAO is up and running, we plan to introduce multichain staking to the ecosystem. This will allow new stable chains to come online using the same POSDAO consensus (with different validators) and the same STAKE staking token.

We call this concept “horizontal scalability” and hope it will be the start of a new era of stable chains, all of which are secured with a single staking token and tailored to specific use cases. These chains will be able to interact with one another through the interoperability protocols, uniting different stable coins under a single infrastructure umbrella.

We intend to keep growing as a major DeFi player not just in the payments landscape, but also providing private transactions, a cross-chain lending environment, and using our TokenBridge technology to merge ecosystems together.

DeFi looks to be the second sustainable use case for Ethereum, the first being the ICO model. I can’t help but think we’ve only scratched the surface of potential use cases for DeFi so long term it’s difficult to envision the future, but I anticipate the way we interact with financial markets will completely change. If you consider the fact that financial markets remain more or less unchanged since the Industrial Revolution, there’s plenty of room for innovation.

In a sense, the creation of DeFi technology is similar to the invention of the Steam Engine in that it can be a linchpin for something much bigger. In the steam engine’s case, it was the mainspring for the Industrial Revolution, but in DeFi’s case, as I stated earlier, we really cannot envision the impact of adoption on a global scale. In short, the future of DeFi looks to be limited only by imagination.

To find out about xDai Stable Chain, you can visit the xDai site. We have been creating an informational series about xDai and POSDAO, which goes into the details of how xDai was born and where it is heading in the future. Make sure to also subscribe to our Twitter and Telegram group to keep up with the latest news. Thank you for following our progress!

The Defiprime Post #91: Your Weekly DeFi News in Bite-Sized Fashion

This week’s issue covers events between April 24th and May 1st, 2022

In this post, we’ll break down how these assets work via rebases and walk through top example projects from today’s cryptoeconomy

The Defiprime Post #118: Your Weekly DeFi News in Bite-Sized Fashion

The Defiprime Post #14: Your Weekly DeFi News in Bite-Sized Fashion